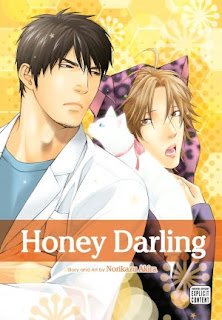 For those that don’t know, boys’ love (abbreviated as “BL”) manga is a comic book that features romance between male characters. “Yaoi manga” is a subset of BL that usually depicts explicit sex. Honey Darling is a stand-alone, yaoi graphic novel that tells the story of an idle young man whose rescue of a kitten brings him purpose and maybe love.

The focus of Honey Darling is Chihiro Takahashi, a young man who drifts through life with no purpose. One evening, shortly after leaving work, Chihiro finds an abandoned kitten in a box. Initially reluctant, he rescues the female kitten and names her Shiro. She becomes his surrogate daughter, and soon, he couldn’t imagine his life without her.

One evening, he arrives home to discover that Shiro has fallen ill. While searching aimlessly for an animal hospital, Chihiro runs into Daisuke Kumazawa, a local veterinarian who takes Shiro into his care. Watching Dr. Kumazawa in action, Chihiro realizes that he would like to work in a vet clinic. The good doctor hires him to work at Kumazawa Pet Clinic, but he also needs a live-in housekeeper. Soon, Chihiro has a new home, double-duty at the clinic and in Kumazawa’s home. But living with the handsome vet makes Chihiro feel really strange inside. Is this love?

Creator Norikazu Akira tells the story of Chihiro Takahashi and Daisuke Kumazawa (and Shiro, of course) over the course of a seven-chapter serial entitled, “Animal.” Individually, they read quite well, with each short story having a solid beginning, middle, and end. Collected as the graphic novel, Honey Darling, the offers the reader a chance to savor a slow building love story that is built around romantic cliffhangers accentuated with flower tones and effects.

Chihiro Takahashi is an especially likeable character, a sort of lovelorn, girlish, yet somewhat masculine man. Daisuke Kumazawa is a bit aloof, perhaps too aloof, which comes across in the story; I found that I sometimes could not warm to him. Shiro the kitten is a scene-stealer, almost turning this boys’ love manga into a cat manga.

Honey Darling is cute and charming and goes down like a cup of hot cocoa, but this is not a love story as empty calories. The romance does hit many bumpy moments – enough to keep the reader interested. Norikazu Akira saves the best, the hot sex, for last, and boy, is it hot. The passion is, however, a nice payoff for the patient reader, and Honey Darling will make for a happy reader.

Posted by Leroy Douresseaux at 6:18 AM