I Reads You Book Review: THE HEIRESS AND THE CHAUFFEUR Volume 1 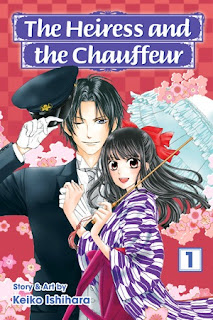 [A version of this review first appeared on Patreon.]

The Heiress and the Chauffeur is a shojo manga from Keiko Ishihara (the creator of Strange Dragon).  The series is set in Japan's turn-of-the-century Taisho Era (1912 to 1926) and focuses on the close personal relationship between a young lady and her chauffeur, a relationship that is the subject of some scandal in local high society.

The Heiress and the Chauffeur, Vol. 1 (Chapters 1 to 4) introduces Sayaka Yoshimura, daughter of the Yoshimura Family.  When the young heiress has to be driven to and from her all-girls finishing school, the servant to do that is 22-years-old Shinobu Narutaki, the chauffeur to the Yoshimura Family.  When rumors swirl at the school that she is having a forbidden love affair with Narutaki, Sayaka scoffs at those rumors.

Still, Sayaka and Narutaki have been together for a long time.  Sayaka's mother died, and her father is often away on business.  For so long, he has been by her side when she needs someone.  When Narutaki breaks decorum, however, Sayaka may have to dismiss him.  Can she really do that?

[This volume includes a short story, “Lucas and the Bandit,” and a series bonus story, “The Promise from Four Years Ago.”]

As shojo manga go, The Heiress and the Chauffeur is rather ordinary.  Hey, it is just another love story about a teen girl who has become attached to the guy who has always been by her side.  It is quite familiar:  he's always been by my side, and he is like a brother to me, says the impressionable young heroine.

The Heiress and the Chauffeur Volume 1 sets itself apart by delving into the nature of social class and of societal expectations.  There are times in this series when it seems as if creator Keiko Ishihara does not understand the fact that the romance between her leads feels strongest when it is threatened.  It is so obvious that Sayaka and Narutaki are in love that it would be weird if they were not.  The conflict and especially the push and pull from outside forces against their relationship is what really drives this narrative.  I would like to see more of that melodrama than the lovey-dovey stuff.

Reviewed by Leroy Douresseaux a.k.a "I Reads You"

Posted by Leroy Douresseaux at 9:53 AM No comments: