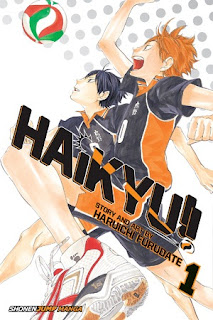 Haikyu!! is a sports manga from creator Haruichi Furudate.  The series focuses on a teen boy's quest to become a national volleyball champion.

Haikyu!!, Vol. 1 (entitled Hinata and Kageyama; Chapters 1 to 7) introduces Shoyo Hinata.  Ever since he first saw the legendary haikyu (volleyball) player known as “the Little Giant” compete at the national volleyball finals, Hinata has been aiming to be the best volleyball player ever.  However, in a sport in which tall athletes dominate, Hinata's height of 5'4” is considered too short.  Still, he does not believe that a player needs to be tall in order to play volleyball, especially when a player can jump higher than anyone else – as he can.

After losing his first and last volleyball match of his middle school career, Hinata enters Karasuno Public High School, once considered an elite volleyball high school.  He is shocked to discover that his opponent is a guy he considers his rival, Tobio Kageyama, "the King of the Court."  Now, Hinata and Kageyama must learn to play together if they want to make it onto the school's volleyball team.

The Haikyu!! manga will likely draw comparisons to Tite Kubo's legendary basketball manga, Slam Dunk, which I think is one of the world's all-time create comics.  Spiritually, Haikyu is related to Slam Dunk, but the former is a bit darker than the latter.

Haikyu Volume 1 introduces two ambitious athletes who find themselves on the outside of the sport they love.  Haruichi Furudate depicts a situation in which “guts and determination” are not enough to take an athlete to the top.  There may be thousands of competitive track and field athletes out there “giving it a 120%,” but almost none of them will beat Olympic gold medalist Usain Bolt when he is at his physical peak – no matter how hard they try.  I'm just keeping it 100, folks.

Furudate's other conceit is that even the best and most gifted athlete can find himself on the outside looking in unless he functions in a team setting.  Teammates may find such an elite athlete too taxing and abandon him, which essentially neutralizes an elite athlete.

In spite of its comedic leanings, Haikyu is likely a high school sports comedy-drama.  Its creator seems determined to take his characters, the volleyball players, to task, forcing all, from the best to the least, to learn how to be a team, if any of them are going to succeed.  So far, it makes for captivating reading.

Posted by Leroy Douresseaux at 4:15 PM No comments: 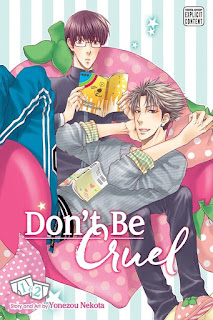 Don't Be Cruel is a yaoi manga from popular mangaka, Yonezou Nekota.  Yaoi manga is a subset of boys' love (or BL) manga, which depicts amorous situations between male romantic leads.  Yaoi manga usually features explicit depictions of sex between those male leads.  Don't Be Cruel focuses on a playboy who forces a studious classmate into a sexual relationship.

SuBLime Manga is making Don't Be Cruel available in a 2-in-1 omnibus edition in both print and digital formats.  2-in-1 editions combine two graphic novels in a single paperback volume.

Don't Be Cruel 2-in-1 Edition, Vol. 1 finds Takahashi Nemugasa forced against a fence.  Who has backed Nemugasa into a corner?  It's Hideyuki Maya, the tall, dark, and handsome school playboy.  Why has Maya put Nemugasa in such a vulnerable position?

Nemugasa attends school on a scholarship, and while his grades are generally good, a recent academic setback has put him in danger of loosing that scholarship.  In an act of desperation, Nemugasa cheats, but Maya catches him.  Now, Maya wants Nemugasa to report to his apartment twice a week for sex.  Nemugasa submits, but Maya never seems to get enough.  The real problem is this:  can a sexual relationship built on blackmail be something more?

[This volume includes the bonus story, “The Morning After They Became Lovers,” and some bonus illustrations.]

This changes when author Yonezou Nekota introduces two characters into the story, both are cousins of Hideyuki Maya.  There is Akira, a tutor and graduate student at K University.  Next is Jutta, who is also Akira's brother.  Akira acts as a dark and handsome, wise sage counterpoint to the tom-catting Maya.  Jutta is the uke comic relief who openly flirts with Nemugasa and obviously wants to be in a relationship with him.

The addition of these two characters creates romantic entanglements such as the love triangle and jealousy.  Nekota starts forcing her leads, Nemugasa and Maya, to work on their relationship and to even fight for their love.  Suddenly, the recreational sex fades and romance takes center stage, as Nekota offers her readers a front row seat to the evolution of a BL couple from sexual coercion to struggling young love.

Don't Be Cruel is thoroughly enjoyable, especially as one goes deeper into the narrative.  Personally, I reached a point where it was hard for me to stop reading.  I am assuming that there is more of this series coming, and there should be.  Don't be cruel, Nekota-san.

Posted by Leroy Douresseaux at 8:07 AM No comments: