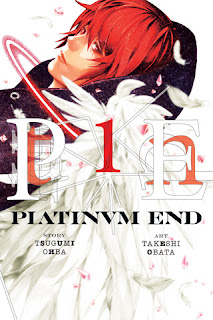 Platinum End is the new manga from the mangaka team of writer Tsugumi Ohba and artist Takeshi Obata.  They are best known for their bestselling and controversial manga, Death Note, and also for the insider manga, Bakuman。.

Platinum End, Vol. 1 (Chapters 1 to 3) introduces orphan Mirai Kakehashi.  He is tired of life and attempts suicide by jumping from the roof of a building.  Instead of dying, Mirai is saved by an angel named Nasse.  Through her, Mirai learns that 13 humans have been chosen as candidates to replace God.  Each has a guardian angel, and Nasse is Mirai's.

Nasse gives Mirai the “angel's arrow” which can make anyone, male or female, hit with that arrow love Mirai for 33 days.  She gives him wings that allow him the freedom to go anywhere he wants.  The problem is that these new powers and this God candidate contest both have a dark side.

The Platinum End manga, like the Death Note manga, is shockingly edgy.  It is obvious from the beginning that this new manga by the Ohba-Obata team will be dark, but by the end of this volume's three chapters (which are rather longish), events reveal a sinister mood that is beyond the obvious.

Platinum End Volume 1 is the kind of first volume that practically forces the reader to return for more.  And I love this sinister.  Dear reader, I should admit that I am a huge fan of Ohba and Obata's Bakuman。and plan to read it again.  I think that Obata certainly deserves his nickname, “the god of drawing;” he is that good.  Trust me, however; Platinum End is going to be a helluva manga, and it has a heckuva first volume.

Posted by Leroy Douresseaux at 11:00 AM No comments: 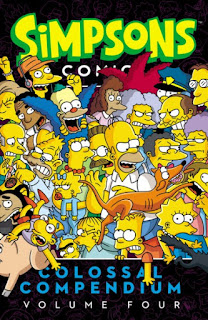 “The Simpsons” is an American animated television sitcom created by Matt Groening for the Fox Broadcasting Company.  “The Simpsons” began in 1987 as a series of animated shorts that were part of the comedy variety television program, “The Tracey Ullman Show.”  The shorts were eventually developed into a half-hour animated TV series and began being broadcast on Fox in December of the 1989-90 television season.  “The Simpsons” continues to this day, and Fox has ordered new episodes into 2018.

“The Simpsons” present a satirical depiction of a working class family which consists of Homer Simpson (the father), Marge Simpson (the mother), Bart (the oldest child and only son), Lisa (the precocious and brilliant elder daughter), and Maggie (a baby girl).  “The Simpsons” also parodies American culture, pop culture, society, politics, media, etc. via the denizens of The Simpsons home town, Springfield.

In 1993, Matt Groening, Bill Morrison, and Steve and Cindy Vance founded Bongo Comics Group (or simply Bongo Comics).  Over the course of more than two decades, Bongo Comics has published numerous comic book series and single-issue publications based on “The Simpsons.”  The comic books have starred and featured all the characters that are part of this franchise, from the Simpsons clan to the various supporting characters, including Ralph Wiggum and his father, Chief Wiggum; Itchy & Scratchy; Krusty the Clown, Duffman, McBain, and Mr. Burns and Smithers, to name a few.

It has been at least a decade since I last read a Simpsons comic book (although I have read one since I finished this book).  I always enjoyed them, so I don't know why I stopped.  Bongo Comics consistently delivers high-quality comic books that capture the spirit of “The Simpsons” television series.  I was intrigued when Harper Design sent me a copy of Simpsons Comics Colossal Compendium Volume 4.

Right from the start, Simpsons Comics Colossal Compendium Volume 4 delivers a bang with the story “Donut Disturb,” which follows Bart and Lisa's battle to win the “Donut Kid of the Year” contest.  This contest is put on by “Lard Lad,” the immensely popular donut chain, and this contest has plenty of wacky contestants.  However, the true fun and the best satirical moments come after the winner claims the crown, which hangs heavy on the head.

Mike Kazaleh, one of my all-time favorite cartoonists, draws the Chuck Jones-inspired “The Man of the House.”  The story makes me think that the true comedic potential of Ralph Wiggum really has not been tapped.  Also, “Sun Burns” shows Mr. Burns in all his grubby Rupert Murdoch-like glory, but the story also showcases the plucky side of the brainy Lisa Simpson.

You don't have to be a fan of “The Simpsons” to like Simpsons Comics Colossal Compendium Volume 4, but if you like good humor comics, you need an occasional jolt of Simpsons comic books in your reading life.  The creators and editors behind Bongo Comics' Simpsons comics are as good at humorous parody and satire as any other humor comics creator – and better in most cases.  So that is what the Simpsons Comics Colossal Compendium series is here to do – fill your comedy and humor comics needs.

Posted by Leroy Douresseaux at 10:57 AM No comments: 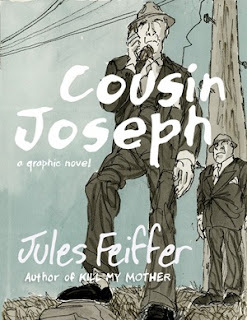 Born in 1929, Jules Feiffer is an American syndicated cartoonist, author, playwright, screenwriter, and comics creator.  He may be best known for his long-running comic strip, entitled Feiffer, which ran for 42 years in the venerable New York City weekly, The Village Voice.

Two years ago, Liveright, an imprint of W.W. Norton & Company, published Kill My Mother: A Graphic Novel, a brand-new, Film-Noir inspired graphic novel by Feiffer.  Kill My Mother opens in Bay City, California in the year 1933.  The story revolves around a woman named Elsie Hannigan and her estranged teenage daughter, Annie, who hates her mother.  Elsie is a widower, following the murder of her husband, Sam Hannigan, a policeman.  Elsie's life is hectic and complicated.  Her boss is her late husband's former partner, Neil Hammond, a hard-drinking, has-been private detective who takes shady jobs.  Hammond ends up murdered, the beginning of a mystery spread over a decade.

Feiffer's new comic book is entitled Cousin Joseph: A Graphic Novel, the follow-up to Kill My Mother.  Cousin Joseph is set in Bay City in 1931, two years before Kill My Mother opens, and it reveals why and how Sam Hannigan was killed.  Detective Sam Hannigan is a bare-knuckled, tough, no-nonsense cop who does not hesitate to use his fists to resolve a case or a dispute.  Sam is also a bag-man for a mysterious Hollywood power broker that he knows only as “Cousin Joseph.”  Sam delivers payoffs to other Hollywood types for Cousin Joseph, and if they don't comply with Cousin Joseph's demands, Sam also delivers brutal beatings.

Bay City is also roiling with labor unrest.  Hardy Knox, owner of the cannery, Knox Works, is facing a strike by his employees who are members of a union led by Billy Doyle.  Billy and Sam go way back, but Sam may have to call out his union-busting team, The Red Squad.  Sam knows that he is on a mission, but it may be the wrong mission – one that will make him enemies – some close to home and some quite deadly.

The first time I tried to read Kill My Mother, I stopped after a few pages.  I avoided the galley/review copy that the publisher Liveright has sent to me.  I finally forced myself to read Kill My Mother and ended up loving it.  I had no such problems with Cousin Joseph, for which I also received a galley, as I dove right into book.

Cousin Joseph is a quintessential American graphic novel and comic book, something rare.  Jules Feiffer not only tackles the complexities of the American dream, he also illustrates how Americans see it differently.  He even delves into the notion which some American have that the American dream is not for everyone who lives in America.  Only certain people can have the best of America, these people believe.  Everyone else:  the second class citizens, those with the wrong skin color, those who worship differently; is of an undesirable ethnic origin.  Those people have to know their place, and it ain't anywhere near the top.  For some, America is about dreams of a place at the top of society and joy of finally reaching that pinnacle.  For others, there is struggle and prejudice, and that is the way it should be, almost as if it were part of a natural order in a certain kind of America.

Years ago, I heard an old white lady tell someone that she loved movies like A Few Good Men (1992) because they reflected the best of us (America).  I like Cousin Joseph because it skins the American myth raw.  This comic book is about the story Americans tell themselves and the whole world, but Americans have no plan to make that myth the real thing.

Posted by Leroy Douresseaux at 9:19 AM No comments: