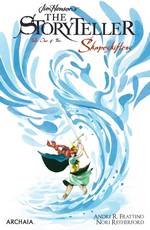 Posted by Leroy Douresseaux at 5:10 AM No comments:

Comics, Magazines and Books from Diamond Distributors for March 2, 2022 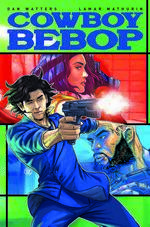 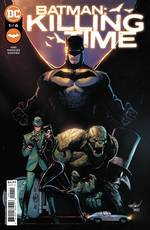 Posted by Leroy Douresseaux at 4:47 AM No comments:

MARVEL - From StarWars:  Marvel Comics has announced a comic book adaptation of the Disney" series, "The Mandalorian."  The eight issue series will adapt each of the first season's eight episodes.  Rodney Barnes ("Killadelphia") will write and Georges Jeanty will draw.

SONY SPIDER-MAN U - From RadioTimes:  Actor Charlie Cox went to a theater near where he lives to see how people react to his appearance in "Spider-Man: No Way Home" as "Matt Murdock/Daredevil" was not pleasantly surpised.  But he says he will reprise Matt Murdock in a future Marvel Cinematic Universe project.

SONY SPIDER-MAN U - From WeGotThisCovered:  Visual effects company, Digital Domain, was still working on VFX for "Spider-Man: No Way Home" a month after the film was released to theaters.

COMICS - From BleedingCool:  Author Margaret Atwood and author/comics scribe Neil Gaiman are among the contributors to a comic book anthology, "Little Earthquakes: The Graphic Album," which will contain 24 stories inspired by the 12 songs from "Little Earthquakes," the 1992 album by Tori Amos.

DC MILESTONE - From BleedingCool:  DC Comics' "Milestone Universe" is now known as "Earth-M," and it is expanding with "Duo," a new comic book from writer Greg Pak and artist Khoi Pham.

From DCBlog:   In a Q&A, the creative team of Greg Pak, Khoi Pham, and Scott Hanna introduce "Earth-M" title, "Duo."

EN MEMORIAM - From BleedingCool:  Comic book writer, novelist, and poet, Tom Veitch, has died at the age of 81.  He was best known for his work on "Animal Man" and "The Nazz" for DC Comics; "The Light and Darkness War" (Marvel); and Dark Horse Comics first "Star Wars" comic book, "Dark Empire" and its sequel, "Dark Empire II."  His brother was comic book creator, Rick Veitch.

DC TV/SANDMAN - From Empire:  Neil Gaiman talks about the Netflix adaptation of his legendary comic book series, "The Sandman."

From AppleInsider:  Amazon's comixology migration is a disaster - here's what you need to know.

MANGA - From CBR:  42-year-old manga-ka Atsushi Okubo, the creator of such manga as "Soul Eater" and "Fire Force," says that he has just turned in the last chapter of "Fire Force," the final manga of his career.

MARVEL - From BleedingCool:  Writer Chris Claremont's five-issue "Gambit" miniseries will be drawn by Sid Kotian, and the first issue will arrive May 2022.

IMAGE COMICS - From BleedingCool:  Skottie Young and Kyle Strahm are launching a new fantasy comic book series, "Twig," in May from Image Comics.

GEORGE PEREZ - From ComicsBeat: In March, The Hero Initiative will publish a limited edition trade paperback edition of Kurt Busiek and George Perez's seminal crossover comic book, JLA/Avengers.  The publication, which will be limited to 7,000 copies, will benefit Perez who has Stage 3 pancreatic cancer.

From Newsarama:   This is an interview of George Perez posted Dec. 10th, 2021, posted a few days after he announced his cancer prognosis.

SONY SPIDER U - From WeGotThisCovered:  "Spider-Man: No Way Home" has passed "Avatar" at the all-time domestic box office.

MANGA - From ANN:   Shueisha announced that its MANGA Plus app will allow users to read all the English chapters of its simul-release manga series for free for one year.

COMICS - From BleedingCool:  Titan Comics' "Blade Runner 2039" could be the end.

MARVEL - From BleedingCool:  The upcoming comic book, "Punisher," will supposedly do for "The Punisher" character what the 1980s story line, "Born Again," did for "Daredevil."

MARVEL TELEVISION - From Deadline:  Disney is set to get the rights to the six TV series produced for Netflix by the now-defunct Marvel Television.  However, Disney is being quite about what the new streaming home will be for the "Defenders" universe shows: "Daredevil," "Jessica Jones," "Luke Cage," "The Punisher," "Iron Fist," and "The Defenders."

DC CINEMA - From Variety:  Warner Bros. releases a social media video clip that contains the first footage from "Aquaman and the Lost City" and clips from "Black Adam," "The Flash," and "The Batman."

SONY SPIDER U - From Variety:  Kevin Smith says that 2022 Oscar nominations' snub of "Spider-Man: No Way Home" in the "Best Picture" category proves why no one watches the ABC television broadcast of the Oscars ceremony.

DC CINEMA - From IGN:  Actor Paul Dano, who plays "The Riddler" in the upcoming film, "The Batman," says that the Riddler sees himself as a vigilante like Batman.

DC COMICS - From GamesRadar:  DC Comics' big event after "Death of the Justice League" will be "Dark Crisis."  The seven-issue monthly miniseries will be written by Joshua Williamson and drawn by Daniel Sampere and begin June 2022.

MARVEL - From GamesRadar:  Marvel has provided a first look at Jonathan Hickman and Chris Bachalo's story for "Moon Knight: Black, White and Blood #1."

DC COMICS - From GamesRadar:  DC has released preview images from the upcoming "Batman/Catwoman: World's Finest #1," which is due March 15th.

EN MEMORIAM - From 2000AD:  British illustrator and comic book artist, Ian Kennedy, has died at the age of 89, Tuesday, February 7, 2022.  He may be best known for his comics work for the Scottish media company, DC Thompson, especially "Hotspur" and the war comic, "Commando," for which he drew of 1600 covers.  Kennedy also helped launch the 1980s "Dan Dare" revival for "Eagle" magazine.

SONY SPIDER-MAN U - From TheDirect:  "Spider-Man: Across the Spider-Verse Part One" producers Chris Miller and Phil Lord talk about the possibilities of a crossover with the live-action Marvel Cinematic Universe multiverse.

DARK HORSE COMICS - From BleedingCool:   Dark Horse will collect the first eight chapters of the Kickstarter-funded comic, "The Winds of Numa Sera," in June 2022.  The series is from creators and writers Morgan Rosenblum and Jonny Handler, and artists Eduard Petrovich, Filipe Andrade, Eduardo Mello, Alessio Moroni, and Valentina Taddeo, and lettered by Ismail Nihad.

MARVEL STUDIOS - From HuffPost:  Channing Tatum is apparently too traumatized to watch Marvel movies.  The trauma comes from the fact that Disney cancelled his planned "Gambit" film after it bought 20th Century Fox, which was originally developing the film.

BLACK COMICS - From BloodyDisgusting:  Rap music legend, Snoop Dogg, and television writer-producer and comic book writer, Rodney Barnes ("Killadelphia") are united for a horror graphic novel, "Tales from the Crip."  The graphic novel will be published by Barnes' Zombie Love Studios in association with Snoop's Snoopadelic Films and is due Fall 2022.

SONY MARVEL U - From THR:   Dakota Johnson is in talks to play the title character in "Madame Web," the Sony spinoff centered on the Spider-Man character first introduced in 1980’s "The Amazing Spider-Man No. 210."  Madame Web is a clairvoyant mutant who specializes in predicting the future of Spider-themed superheroes.

MARVEL - From FanboyPlanet:  The House of Ideas is reviving "Savage Avengers" with a new creative team, writer David Pepose and artist Carlos Magno.  The new series is scheduled to arrive May 4th.

MANGA TO ANIME - From YahooNextShark:  "Uzumaki" creator Junji Ito will voice a character in the anime adaptation of Uzumaki. The series is set to debut October 2022 on Adult Swim's "Toonami" block.

MARVEL - From CBR:    From the House of Ideas, the "New Fantastic Four" returns May 25th, 2022.  That would Logan/Wolverine, Peter Parker/Spider-Man, Daniel Ketch/Ghost Rider, and Bruce Banner/Hulk, as first seen over 30 years ago in "Fantastic Four #347" by the legends Walt Simonson and Art Adams.

EN MEMORIAM - From BleedingCool:  Comic book editor and writer Brian Augustyn died this past weekend at the age of 67.  Many will remember him as the writer of the 1989 Batman one-shot comic book (or graphic novel), "Gotham by Gaslight."

MARVEL - From Gizmodo:   The X-Men, Avengers, and Eternals come together in the Marvel Comics' event series, "Judgment Day," which also sees the X-Men once again participating in the events of the Marvel Universe.

DC CINEMA - From Variety:  Actor Robert Pattinson says that his agent was shocked that Pattison would be taking over the role of "Batman" in director Matt Reeves' "The Batman."

BANNED COMICS - From BBCNews:  Various editions of Art Spiegelman's seminal graphic novel, "Maus: A Survivor's Tale," have topped Amazon sales charts after in the wake of the news that a school board in Tennessee banned the book from school libraries.

Posted by Leroy Douresseaux at 12:25 PM No comments: 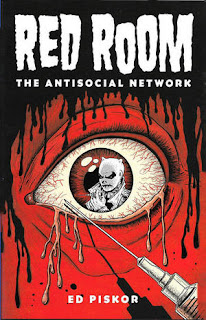 Red Room: The Antisocial Network is a 12-issue new comic book series from cartoonist Ed Piskor.  Piskor is best known for Hip Hop Family Tree, a comic book that chronicles the early history of Hip-hop culture and that has been published in both graphic novel and serial comic book form.

Publisher Fantagraphics Books describes Red Room: The Antisocial Network as “a cyberpunk, outlaw, splatterpunk masterpiece.”  Red Room focuses on a murderous, dark web subculture in which a secretive audience pays with cryptocurrency so that it can view “murder for entertainment” in real time via webcam.  A “Red Room” is a place on the Internet with an encrypted I.P. address.  Each Red Room is a webcam stream where viewers can watch a “torture star” murder another human being in the most brutal, savage, vile, and stomach-turning ways.

Red Room: The Antisocial Network #3 introduces Levee Turks.  Once upon a time, he was an encryption software prodigy.  Now, he's serving a life sentence for creating an online drug empire, and he has been in prison for six and a half years.  In that time, however, the dark web has made use of  what Levee created:  the suite of encryption software he made for the black market; the “Chat” client; the bitcoin trading app; and the “Anonymous” video streaming.  Hell, all his creations are in service of the Red Rooms' multi-billion dollar snuff industry.

Enter the FBI, led by Agent McNamara, proposing a deal.  McNamara wants Levee Turks to infiltrate the Red Rooms and help the FBI crack Red Room software, so that it can crack down on the deepest corners of the dark web. Reunited with his girlfriend, Rita, Levee discovers how much as changed.  Does he really know what he is getting into?

THE LOWDOWN:  I don't have much to say about Red Room #3.  Of course, it is a damn good comic book, and I've already made this clear in reviews of previous issues.  The Red Room isn't dystopian science fiction; I believe that it is actually prescient – if not now, sooner than we would like to believe.

Ed Piskor does also offer a nice change of pace with Red Room #3.  Thus far, he has proven quite skilled and deft in creating interesting characters that are cogs in the Red Room gore-covered wheels, such as issue #1's David Fairfield and issue #2's Doctor Daniels.  It would be great to see Levee Turks and Rita again … before they're chopped up.  It is funny that they are both clueless and in deeper than they could ever imagine.

I READS YOU RECOMMENDS:  Fans of Ed Piskor's work and of alternative comics as science fiction will want to read Red Room.


The text is copyright © 2022 Leroy Douresseaux. All Rights Reserved. Contact this blog or site for reprint or syndication rights and fees.

Posted by Leroy Douresseaux at 4:19 AM No comments: