MARVEL - From GamesRadar:   Gwen Stacey is "Spider-Gwen" no more in "Heroes Reborn."

MARVEL STUDIOS - From Variety:  Anthony Mackie finally takes the lead in a Marvel Studios project and gets a cover profile from "Variety."

FOX MARVEL U - From YahooEntertainment:  Once upon a time, Hugh Jackman saw director Lee Daniel's Oscar-winning film, "Precious," and wanted Daniels to direct the Wolverine sequel that would become 2013s "The Wolverine."

BLACK COMICS - From News19:  A profiel: "Illustrator Sanford Greene paving the way for Black heroes, and the artists behind them."

DC COMICS - From CBR:   Who is Val-Zod, Earth-Two's black Man of Steel?

MANGA - From CBR:  How to start reading the Inuyasha manga or watching the animae.

DC TV - From Deadline:   The CW has renewed "Superman & Lois" for a second season after its strong debut on multiple platforms.

CONVENTIONS - From GamesRadar:   San Diego Comic-Con International 2021 will be an online-only event.

DC COMICS - From BleedingCool:  News of a Superman movie featuring a "Black Superman" has caused eBay sales on some DC Comics titles to explode.

COMICS TO TV - From EW:  "Entertainment Weekly" has a first-look at the comics-to-screen translation of Netflix's "Jupiter's Circle."  The series is based on the comic book by Mark Millar and Frank Quitely.

DC COMICS - From DCBlog:   The worlds of comic books and video games collide  on April 20, 2021 as DC and Epic Games announced plans to publish "Batman/Fortnite: Zero Point," a six-issue miniseries that combines the Dark Knight and other DC Super Heroes with the global gaming phenomenon, "Fortnite."

Posted by Leroy Douresseaux at 10:06 PM No comments:

#IReadsYou Review: SCOOBY-DOO, Where Are You? #107 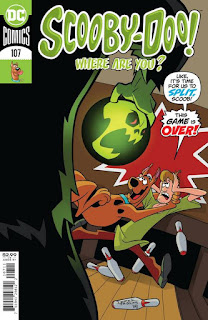 Welcome, dear readers, to my continuing journey through the Scooby-Doo, Where Are You? comic book series, which began publication in 2010.  I renewed my subscription (for a second time), and this is the ninth issue of my third subscription run that I have received.

Scooby-Doo, Where Are You? #107 opens with “Striking Terror,” which is written by Derek Fridolfs and drawn by Randy Elliot.  Mystery Inc.:  Scooby-Doo, Shaggy, Fred, Daphne, and Velma solved “The Mystery of the Terror-Dactyl” a day earlier.  Now, it's time for a day off, and the Coolsville bowling alley is the place to be on a Friday night.

The gang aren't the only ones that feel that way because “Coolsville Bowl” is packed.  However, electrical problems are causing the bowling pins on several lanes to freeze, which means the kids are going to have to wait for a lane to open up for them.  Lanes may become available soon though, as the the ghostly and headless “Skulldugger” is haunting the place.  Using his bowling ball, which glows with a cackling green skull inside, the Skulldugger wants everyone to leave the bowling alley.  Looks like Mystery Inc. will have a mystery to solve after all

The second story, “Witch Pitch,” is, as usual, a reprint story and is written by John Rozum and drawn by Cameron Stewart and Andrew Pepoy.  [This story was originally published as the back-up story in Scooby-Doo #37 (cover date: August 2000).]   Once again, Scooby and company are looking for an opportunity to sit down and have some fun.  This time they are at Maize Field for a game featuring Fred's favorite baseball team, the Nebraska Corndogs.  The evening is nearly ruined when a witch flies in on her broom and puts a curse on Corndogs pitcher Hector Martinez, just as she recently did to his teammate, “Spanky” Schultz.  Time to chase a witch!

Ever since I first started watching the seminal Scooby-Doo Saturday morning cartoon, “Scooby-Doo, Where Are You!” (1969-70), so many decades ago, I have been a fan of the green-hued specters and haunts that Mystery Inc. has chased.  “Striking Terror” is an average story as the stories in this series go, but I love the look of the Skulldugger as drawn by Randy Elliot and colored by Pamela Lovas.

“Witch Pitch” is a good story, and I would would like to see it adapted into one of those direct-to-DVD films that Warner Bros. Home Entertainment has been releasing since 1998's Scooby-Doo on Zombie Island.  Also, I think this is the first time that I have come across the idea that Fred is a baseball fan and that the kids like to bowl.

So, I recommend Scooby-Doo, Where Are You? #107 to fans of Scooby-Doo haunted sports stories.  And until next time, Scooby-Dooby-Doo!


The text is copyright © 2021 Leroy Douresseaux. All Rights Reserved. Contact this blog or site for syndication rights and fees.

Posted by Leroy Douresseaux at 4:25 PM No comments: 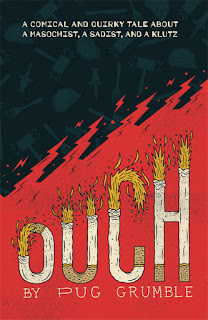 Ouch is a 2020 comic novel from author Pug Grumble.  Comic book people may know Grumble from his seven-volume fantasy graphic novel series, Farlaine the Goblin.  Ouch is a prose novel that offers up a quirky love triangle made up of a masochist, his sadistic girlfriend, and the klutzy girl who enters the picture.

Ouch introduces Sylvester, a man with a bit of thing for pain.  He enjoys everything from splinters and stubbed toes to the pain caused by food burns and getting a tattoo.  Sylvester really gets to experience pain when his kinda-sorta girlfriend, Felicia, gets a hold of him.  A sadistic siren and queen of torments, Felicia will put out cigarettes on Sylvester's back and use sharp objects, even tools, on him.

However, fate steps in one evening while Sylvester is shopping for the ointments, medications, and bandages he needs to recover or even to survive the sadist in his life.  At the Wong Chen Supermarket, Sylvester hears a commotion on another aisle,  There he meets Natalie, a girl under a pile of products that fell on her.  You see, Natalie is a klutz, and not just any kind of klutz.  She is a colossal klutz who could end up in the hospital from a series of events that begins with a mere stumble.

As fate would have it, Felicia must leave Sylvester's life for a while, and happy coincidence (or fate) keeps bringing him to Natalie.  And so nothing will ever be the same for Sylvester, Natalie, or a vengeful Felicia.  Watching it all, from a safe distance, of course, is Sylvester's pal, Socket, who is obsessed with electricity and the shocks he can deliver to people with it, and Poke, Sylvester's narcoleptic porcupine.

THE LOWDOWN:  Ouch is one of those novels that deserves to be called “truly unique.”  It is one of the most different novels that I have read over the last two decades, at least.  Being a fan of Farlaine the Goblin, I requested a copy of Ouch from Pug Grumble, curious about what he would do in a storytelling medium like the prose novel, obviously so different from comics.

Pug has a surprisingly deft touch with prose, and his execution of Ouch's narrative yields a read that is as engaging as anything you, dear readers, will find on the bestsellers list.  What is different is the cast of characters.  For instance, Sylvester, as a masochist, is not usually for popular consumption.  He is an addict, but he is a joyful adventurer in the realms of pain both familiar and unfamiliar.

Felicia is gleeful and shameless, and is more prankster than sadistic villain, although she has dark dreams.  Natalie is a klutz on the level that goes beyond mere bad luck and seems supernatural, as if she and her accidents exist partly in a place that is like “The Twilight Zone.”  The author simply presents them as characters with which we can identify.  Like us, they have needs and wants and confuse which are really important and which are merely indulgences.

If I would find a fault with Ouch, it is that both Felicia and Natalie seem more like the ideas for characters than like actual characters for much of the first half of the novel.  It is when Pug introduces trouble, change, and confusion into their lives that Felicia and Natalie spring to life.  They become whole characters, full of color, conflict, and motivation, and they grab the spotlight from Sylvester, who seems fully formed and complete right from the start of the novel.

Ouch calls to readers looking for something different in a comic novel, and it is truly a comic novel.  Pug offers a misadventure that presents a side of addictions and afflictions that might be off-putting, but is quite interesting, so we can't help but want to get inside these characters.  Ouch is timely, or it seems so.  In an age of strife and pandemics, when self-interest … trumps caution, Ouch is fresh and vibrant and gives us lovable afflicted and addicted rogues and foils.

I READS YOU RECOMMENDS:  People who are really looking to read something that isn't the same old thing will want to read Ouch.

Posted by Leroy Douresseaux at 4:03 PM No comments: 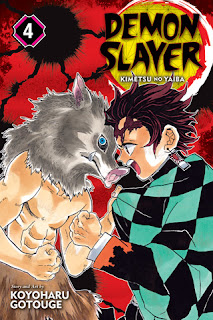 Demon Slayer: Kimetsu no Yaiba is a Japanese manga series written and illustrated by Koyoharu Gotoge.  The manga was serialized in Weekly Shonen Jump from February 2016 to May 2020.  VIZ Media has been publishing an English-language edition of the manga as a paperback graphic novel series under its “Shonen Jump” imprint since July 2018.

The Taisho era Japan (1912 to 1926).  Tanjiro Kamado, a kindhearted boy, sells coal in order to support his mother and four siblings.  After one particularly taxing trip to sell coal, Tanjiro returns to his home in the forest and finds his family slaughtered.  He discovers that a younger sibling, his sister Nezuko, has herself been transformed into a demon by the unknown demon that killed his family.  He becomes a Demon Slayer to find and destroy that demon.

Demon Slayer: Kimetsu No Yaiba, Vol. 4 (Chapters 26 to 34) opens in the wake of Tanjiro and company's battle inside a house full of demons.  Now, Tanjiro finds himself fighting Inosuke Hashibira, a young man who wears a boar's head and who may be a Demon Slayer.  Tanjiro sees him as an ally, but what an ally they will need him to be as they face demons that turn Demon Slayers into marionettes.  Plus, Zenitsu Agatsuma, a demon slayer who seems to be a coward, discovers the existence of Nezuko.

[This volume includes four-panel comics and bonus text and art.]

THE LOWDOWN:  The Demon Slayer: Kimetsu No Yaiba manga was one of 2018's best new graphic novel series.  It is still kickin' in the two-oh-one-nine.

Demon Slayer: Kimetsu No Yaiba Graphic Novel 4 focuses on the characters outside of Tanjiro.  Creator Koyoharu Gotouge has offered new intriguing characters, especially Zenitsu Agatsuma and Inosuke Hashibira, both with interesting pasts and both possessing personalities that clash with the sweet-natured Tanjiro.  More characters are showing layers and textures in their personalities, an element that makes Demon Slayer a manga deserving to be read.

I READS YOU RECOMMENDS:  Fans of demon-fighting heroes will want to read the Shonen Jump title, Demon Slayer: Kimetsu No Yaiba.

The text is copyright © 2021 Leroy Douresseaux. All Rights Reserved. Contact this blog or site for reprint and syndication rights and fees.

Posted by Leroy Douresseaux at 4:04 PM No comments: 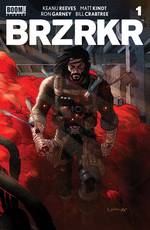 Posted by Leroy Douresseaux at 11:16 AM No comments:

Posted by Leroy Douresseaux at 11:15 AM No comments:

Posted by Leroy Douresseaux at 11:14 AM No comments: