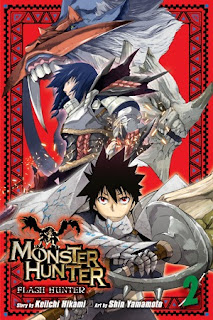 Monster Hunter: Flash Hunter is set in an age when monsters rule the world:  soaring through the sky, treading the earth, and filling the seas.  These monsters have forced humanity to survive on the fringes, so people rely on a special kind of hero to defend them from danger – the Monster Hunters.

Monster Hunter: Flash Hunter, Vol. 2 (Chapters 8 to 15) finds our Monster Hunter trio:  fledgling hunter, Raiga; veteran hunter, Keres; and hunter-scholar, Torche taking on a monster called a Rathian.  Known as the “Queen of the Land,” this creature is nearly impossible to defeat.  Can the Hunters stop a monster that can block out the sun?  Plus, the trio reunite to defend a small village from a monster rampage, but Raiga will find that this mission has summoned someone from his past.

[This volume includes the bonus chapters “Another Hunter,” Story 2 and Story 3 and also “Monhun and Me.”]

The Monster Hunter: Flash Hunter manga is a comic book for fans of the Monster Hunter game... I guess.  I don't think I had ever heard of the game before this manga.  In fact, in spite of its “Teen” rating, I think that preteen readers will like this; it is not as if this manga (or at least this volume) contains material that is inappropriate for them.

Monster Hunter: Flash Hunter Volume 1 does offer a menagerie of interesting and fearsome-looking monsters.  That is the one thing that attracts me to this manga because the characters are not doing much to interest me.  Monster Hunter: Flash Hunter, however, does have potential.  I can see the creative team getting more assured of what they are doing with each chapter.

Posted by Leroy Douresseaux at 5:49 AM No comments: 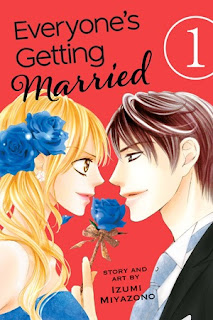 Everyone's Getting Married, Vol. 1 (Chapters 1 to 5) introduces 24-year-old Asuka Takanashi.  She is a successful career woman with an old-fashioned dream.  Asuka wants to get married and become a housewife.  She thinks that she is getting close to that dream, as she has been dating her boyfriend, 30-year-old Kouichi, for five years.  However, Kouichi abruptly breaks up with Asuka to pursue his own career goals.

At a get-together with some friends, Asuka encounters 28-year-old Ryu Nanami, a popular newscaster for the PTV network.  She finds herself attracted to the rumored womanizer, but Ryu says that he'd rather die than get married.

[This volume includes the bonus story, “The Melancholy of Nanaryu.”]

The Everyone's Getting Married manga is one of those manga that pits a man and woman at odds and/or with different personalities against one another.  In real life, such romances are destined to failure, sooner or later, even if they become a couple and get married (Cynical!).

Everyone's Getting Married Volume 1 offers a star-crossed pair that are destined to come together.  The narrative simply offers creator Izumi Miyazono a chance to show how skilled she is at bringing them together while maximizing the tension in order to keep the readers interested.  I am certainly interested in following the long and narrow rocky road to Asuka and Ryo's eventually union.

The clean storytelling matches the clean illustrations and the result is breezy graphical storytelling.  In some places, clean and crystal clear means dull, but overall, the Azuka and Ryo's situation is just too tantalizing to ignore.  I must qualify this review by saying that I am a sucker for shojo manga, especially when the shojo is sho'nuff on the josei side.

Posted by Leroy Douresseaux at 7:53 AM No comments: 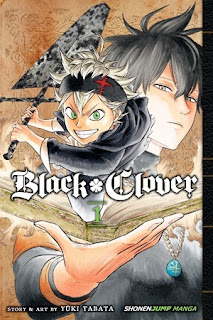 [This review was  originally posted on Patreon.]

Black Clover is a fantasy and action-adventure manga from mangaka, Yuki Tabata, which began serialization in Japan's Weekly Shonen Jump manga magazine in 2015.  The series focuses on Asta, an orphaned boy who dreams of becoming the greatest mage in the kingdom.

Black Clover, Vol. 1 (Chapters 1 to 7; entitled The Boy's Vow) opens in the village of Hage where we meet Asta.  His dream is to one day be the “Wizard King,” the greatest mage in the land, but he has one big problem.  He can't use magic.  When he is 15-years-old, Asta and fellow orphan and rival, Yuno, travel to a tower full of grimoires (books of magic) where other 15-year-olds hope that a grimoire will choose them.

A grimiore will enhance one's magical power, but what if you don't have magical powers, as is the case with Asta?  Can someone who cannot use magic really become the Wizard King?  A rare “five-leaf-clover” grimoire” will begin to answer those and other questions.

I call manga like the Black Clover manga “magical boy” comics.  These are shonen manga that tell the story of a boy who has great power or has the potential to achieve great power.  That boy goes on a journey throughout his tween' and/or teenage years in which he grapples with learning magic; struggles to grow within himself; learns to depend on his friends or be part of a team; and reaches his potential, all while facing some great evil and/or dark conspiracy.  Sounds like Harry Potter, right?

Black Clover Volume 1 reminds me of some of my favorite shonen manga, including Naruto, Bleach, and Blue Exorcist.  Unlike the young male heroes of those manga and unlike Harry Potter, the lead character of Black Clover, young Mr. Asta, has no innate magical power (that we know of at this early point in the series).  However, his scrappy determination and his willingness to learn about new people, places, and things make him an attractive character.  I think many readers can identify with Asta, who has nothing and comes from nothing, but does not accept his limitations.

Black Clover's back story and internal mythology is intriguing, although (once again) we know very little about these things.  This series has the potential to run for a long time, as it slowly leaks out hints about the way things are.  Black Clover is one of the best new series of the year for young readers.

Posted by Leroy Douresseaux at 7:44 AM No comments:

I Reads You Still in Sleep Mode

I still will not do the solemn fake thing.  I'll just come right out with it.  I am putting I Reads You in sleep mode.  This is not really a hiatus, as I plan on rousing I Reads You from slumber and posting on her from time to time.

I am shifting most of what I post here to my Negromancer blog.  Right now, it is not financially feasible to spend time maintaining two blogs, and Negromancer's numbers are 10 times what I get here.  Because of some new sales tax law, Amazon now excludes my home state of Louisiana from its "Amazon Associates" program.

Despite the fact that many people read this blog and many even "borrow" the material that I post here, I do not receive any donations to support I Reads You.  With the Amazon Associates program unavailable to me and the Google Ad program largely a scam of unpaid promises, I Reads You is penniless.

I do appreciate all the visitors that I have received since I first began I Reads You back in September 2009.  Please, come back some now and again, and there may be something new to read.

Posted by Leroy Douresseaux at 7:50 AM No comments: