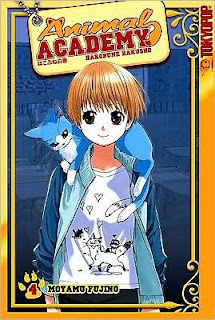 Neko Fukuta was not accepted to any high schools because she is a horrible student, or so she believes. Then, Neko learns that she is enrolled at the mysterious high school, Morimori Academy. That turns out to be a secret school for animal-human shapeshifters, so Neko pretends to be able to transform into a cat, like her roommate, Miiko Suzuhara, who gives Neko the nickname, Fune. Will Fune be able to keep her humanity a secret from everyone?

In Animal Academy: Hakobune Hakusho, Vol. 4, Fune and her classmates continue to struggle with the disappearance of Yuichi Takuma, another human student at Morimori. Confused and uncertain about both her future and status at the school, Fune decides to return home. Fune doesn’t realize that she’s been followed, and one of the followers is the fox/boy, Kotaro Araki.

offers the delights similar to that of another series set at a magical boarding school, the Harry Potter. Animal Academy is also like the X-Men

comics (another kind of boarding school fantasy) because it is also a story about paranormal humans learning how to fit into normal human society while bonding with those like them and learning to appreciate their uniqueness. Like Harry Potter

Stories set in fictional locales can activate imaginations, both young and mature. When these stories take issues relevant to young readers: fitting in (especially in new environments), being accepted, self-discovery, first loves and crushes, they make for engaging reads, and mature readers can certainly recall when those issues meant something to them. Animal Academy is an engaging read because of all these things, as embodied with a winning cast of characters. It’s not just about the magic; it’s also about the bonds and friendships and the rivalries and clubs, which makes the lives and activities of these characters are worth following.

. The superb figure drawing, especially on the portrait-worthy faces of the characters, is attractive. The lush forest backdrops perfectly capture the enchanted aura of a paranormal school. This is an excellent kodomo manga (comics for children) and, most importantly, a really good comic book.

Posted by Leroy Douresseaux at 12:25 PM