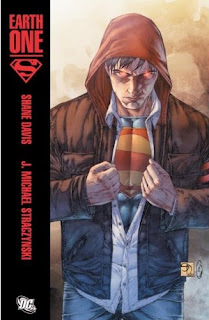 Superman: Earth One is a graphic novel series that re-imagines and retells Superman’s early years. Written by J. Michael Straczynski and drawn by Shane Davis, the first volume of Superman: Earth One was first published in October 2010. It is a damn good read, and I consider it to be the best retelling of Superman’s early days since John Byrne’s still-excellent, Superman: Man of Steel.

Superman: Earth One focuses on a 20-year-old Clark Kent. This farm boy arrives in Metropolis, but he isn’t like other 20-somethings looking to begin their adult lives. Clark can fly, see through walls, and burn objects with his gaze. He goes on job interviews, and leaves his potential employers in shock and awe because of his talent, knowledge, and skills. Still, young Clark is alone and without purpose, but the arrival of otherworldly visitors will reveal his history and may give him purpose – if he so chooses.

I don’t want to say more about the plot and story details. I want the reader to be delightfully surprised over and over again as I was. I initially avoided reading about Superman: Earth One, partly because I thought it would be mildly entertaining, nothing more and certainly not worth my time. I used some Leroy mojo and got DC to give me a review copy, and the review copy put some hoo doo on me. After the first few pages, I really thought that this was just warmed over Smallville, but soon, I was dreading that this fun would end. I think Superman: Earth One does falter early on and in places at the end, but its strengths gloss over such imperfections.

J. Michael Straczynski gives everything about Superman and Clark Kent a sense of purpose and meaning. This is indeed a darker Superman, but not in a grim and gritty or cynical way. Clark Kent lives in a world where people use power, aggression, and self-centeredness to serve their ends. Young Kent is not only trying to figure out what he should do, but also why he should do it. He is looking for signs, but those signs most resonate with him. Plus, Straczynski writes a page-turning action yarn here, so this is thoughtful and explosive.

Shane Davis, who seems to be channeling Carl Potts-era Jim Lee, turns Straczynski’s script into a visually potent comic book. Davis captures Kent’s brooding, stubborn nature with clarity, and presents the science fiction elements and action scenes with energy, a sense of movement, and power that the static images of comic books usually don’t have.

Superman: Earth One is the Superman book that everyone who reads Superman should be reading. Or put it this way: if you know about Superman, you probably need this book in your hands.

Posted by Leroy Douresseaux at 8:16 AM