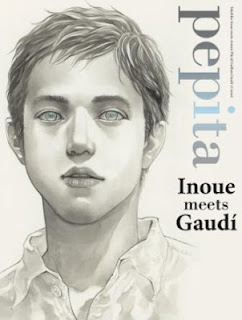 Takehiko Inoue is the famed creator of two acclaimed basketball manga, Slam Dunk and Real. He also produces Vagabond, a manga that dramatizes the real-life figure, Miyamoto Musashi, perhaps the most celebrated samurai of all time. Pepita: Takehiko Inoue Meets Gaudi is a hardcover travel diary comprised of prose, sketches, and artwork produced by Inoue during a 2011 trip to Spain.

Gaudí (full name: Antoni Gaudí i Cornet – June 1852 to June 1926) was a Spanish modernist architect who was born in Spain’s Catalan region. Gaudí, the leading figure of Catalan Modernism, is known for works that reflect his highly individual and distinctive style and also that emphasize his passions: architecture, nature, and religion.

Pepita: Takehiko Inoue Meets Gaudi traces Inoue’s fascination with the legendary Gaudí and also his obsession with the architecture of Gaudí. The book is a travel memoir about the manga master artist’s travels to the Catalan region of Spain, the people he meets, and the stunning architecture he experiences. Much of the journey focuses on the massive Gaudí-designed, Sagrada Família. This iconic Roman Catholic cathedral is located in the city of Barcelona, and it is apparently a perennial news item because it remains under continual construction after more than a century of work.

The press release for Pepita: Takehiko Inoue Meets Gaudi emphasizes the “east meets west” aspect of the two artists’ respective nationalities. That is worth noting. The book is about an influential figure of high art from Spain and also about a manga artist from Japan, a comics creator who is arguably one of the ten best in the world. This book, however, is a bit more personal, inquisitive, and introspective, being more than a comparison of art from different sides of the planet.

Concerning the trip that makes up this book, Takehiko Inoue is on a journey to discover and to learn. The importance of teachers and learning is a theme that reoccurs throughout this book. To that end, Inoue interviews Gaudí scholars, Professor Juan Bassegoda and Professor Ana Maria Ferrin.

Inoue also delves into Gaudí’s longings and aspirations and comes to believe that Gaudí had a deep respect and a love for creatures living in their true forms. In fact, the idea of building within nature or “creating like God” becomes, perhaps, the dominate theme of Pepita. With Inoue’s coaxing, you come to see Gaudí’s respect for nature in his works, which are presented as numerous photographic images.

While Pepita is personal in regards to Inoue, there is a generous sampling of Gaudi’s art and an index of the photographs published in the book, so the book is something of a catalog of Gaudi. Pepita: Takehiko Inoue Meets Gaudi is one of the more unique art books I have ever encountered. It is a good introduction to Gaudi, but it is an even better look into the cerebral side of a great comic book creator, Takehiko Inoue.

Posted by Leroy Douresseaux at 6:17 AM