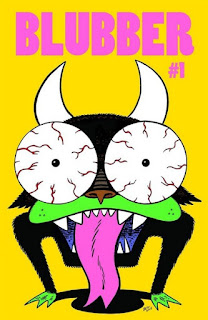 [This review first appeared on Patreon.]

Gilbert Hernandez is the cartoonist, comic book creator, and graphic novelist best known for being one-half of the duo known as “Los Bros.” along with his brother, Jaime Hernandez.  Together, the two Eisner Award (Will Eisner Comics Industry Awards) winners have produced the seminal, alternative comic book series, Love and Rockets, for more than 30 years.  As a “solo act,” Gilbert (a.k.a. “Beto”) has also produced numerous original graphic novels and several comic book miniseries for publishers Dark Horse Comics, DC Comics, and Drawn & Quarterly, as well as for his original publisher Fantagraphics Books.

Fantagraphics recently published Blubber #1, what will hopefully be the start of a new series from Gilbert.  This black and white comic books contains a series of short stories and vignettes featuring a cast of misfits, monsters, and anthropomorphs.  These types of surreal and strange characters and stories have been a hallmark of Gibert's comix going back to the beginning of his public work.

On first glance, Blubber #1 looks ridiculous.  It is like flipping through a self-published vanity comic book full of weirdness.  Reading it, however, gives a far different impression and experience.  Not far into reading it for the first time, I found myself fascinated.  I had to re-read some segments of this comic book because I could not get enough of it.  Even 26 pages of what could be described as Beto's kooky version of the “Wild Kingdom” was not enough for me.

Blubber #1 recalls the ethereal and beautiful explorations contained in Moebius' Une jeunesse heureuse (released as a small leather-bound notebook).  It also has a passing resemblance to the surreal pantomime comix of Jason (who is also published by Fantagraphics in America).  The phallus... ahem... comes in many shapes and sizes, generally as a saggy meat hose or as a gradually swelling tuber.  It's penetrative explorations can be creative or pleasurable, but are consistently dangerous slash destructive.  I'll say no more because you, dear reader, should pay to discover this comic book's wonders.

I hope that more of Beto's id explodes onto enough pages for there to be a second issue of Blubber.  This crazy little comic book proves once again that not only is Gilbert Hernandez the best American comic book writer of the last four decades; he is also one of its essential visionaries.

Posted by Leroy Douresseaux at 10:04 AM