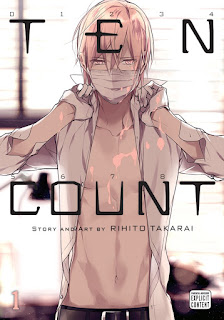 Ten Count is a yaoi manga from mangaka, Rihito Takarai.  Yaoi manga is a subset of boys' love (or BL) manga, which depicts amorous situations between male romantic leads.  Yaoi manga usually features explicit depictions of sex between those male leads.   Ten Count focuses on a corporate secretary who is a germaphobe and the counselor who tries to help him.

Ten Count, Vol. 1 (Chapters 1 to 6) introduces Tadaomi Shirotani, the corporate secretary for The Tosawa Company.  He has obsessive compulsive disorder (OCD) and wears gloves so that he does not have to touch people or things.  He does not eat at restaurants, nor does he even take the train.  He washes his hands so much that they are raw and covered with scars.

One day, the president of The Tosawa Company is in an accident.  One of the people involved in the accident is Riku Kurose, a clinical psychotherapist at Shimada Psychiatric Center.  Kurose immediately recognizes Shirotani's OCD and offers to take him through a 10-step program to cure him of his compulsion.  As they begin the program, Shirotani realizes that his attraction to Kurose grows, causing complications even as he starts to get his compulsion under control.

In her afterword to Ten Count Volume 1, author Rihito Takarai says the she almost worried that readers would complain about the leisurely pace of the chapters that comprise Vol. 1.  I have no such complaints.  Considering the concept and central plot of this manga, having the characters quickly engage in sex would seem unrealistic.  There is something about the glacier pace of two people who know little about each other slowly falling in love that is super-sexy.

I found it hard to take a pause in reading Ten Count.  It is like watching the birth of romance and true love – step by step.  There is powerful dramatic tension and good reading in that.

Posted by Leroy Douresseaux at 9:51 AM