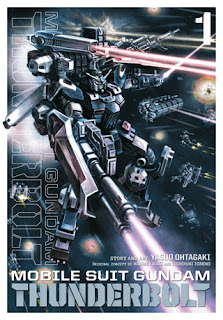 Mobile Suit Gundam was an anime series that was first broadcast in 1979 and 1980.  It is set in the year 2079, also known as “Universal Century year 0079,” according to the “Gundam Calendar.”  The series chronicled a conflict between the Earth Federation and the Principality of Zeon, which declared independence from the Earth Federation.  The result is Zeon's war of independence, the “One Year War,” which affects every continent on Earth and nearly every space colony and lunar settlement.  The smaller Zeon has a tactical advantage through its use of a new type of humanoid weapon called the “mobile suit.”

Mobile Suit Gundam Thunderbolt is a manga set in this classic science fiction universe and apparently takes place simultaneously with the events depicted in the original Mobile Suit Gundam anime.  Created by mangaka Yasuo Ohtagaki, this manga focuses on two rival mobile suit pilots bent on destroying each other.

Mobile Suit Gundam Thunderbolt, Vol. 1 (Chapters 1 to 9) opens to find the Earth Federation trying to retake the Thunderbolt Sector, an area of space that is scarred by the wreckage of destroyed colonies.  However, Federation mobile suits are being picked off by a deadly Zeon sniper, Chief Petty Officer Daryl Lorenz.  Someone has to stop Lorenz and Federation ace, Io Fleming, is the man.  When he gets the latest in Federation tech, a Gundam, Io succeeds where other Federation pilots have failed.

I am vaguely familiar with Mobile Suit Gundam, mostly from seeing images and art related to it has a media and merchandising franchise.  I was a little reluctant to read the Mobile Suit Gundam Thunderbolt manga when I received a copy-for-review of the first volume from VIZ Media.  Now, I can say that the manga has made me interested in learning more about Mobile Suit Gundam.

Mobile Suit Gundam Thunderbolt Volume 1 offers classic mecha action that is as good as any mecha comics that I have read in the past.  Yasuo Ohtagaki puts the reader right into the action with battle and local space area maps.  He shoves the reader inside the mobile suits and all over the debris field that is Thunderbolt Sector.  Troop movement and mobile suit simulations make it easier to understand the position and status of chaotic battles.

Readers do not have to worry about shallow characters.  I am surprised at how deep Ohtagaki gets into the characters' relationships and especially their pasts.  So, especially because this is the beginning, I heartily recommend that readers enter Mobile Suit Gundam Thunderbolt now.  I am willing to say that I think the series is worthy even after only one volume.

Posted by Leroy Douresseaux at 10:31 AM