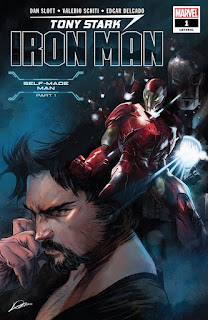 Iron Man is a Marvel Comics superhero that debuted in Tales of Suspense #39 (cover dated: March 1963).  Iron Man is the alter-ego of Tony Stark, a weapons manufacturer, industrialist, and wealthy, glamorous ladies' man.  After an accident, Stark builds a suit of armor to save his life, and with that armor, Stark becomes “Iron Man.”

In the midst of another restart event, Marvel Comics has launched a new Iron Man comic book.  It is entitled Tony Stark: Iron Man.  It written by Dan Slott; drawn by Valerio Schiti; colored by Edgar Delgado; and lettered by Joe Caramagna.

Dan Slott was a writer on The Amazing Spider-Man comic book series beginning in 2008, and he became the series sole writer beginning in 2010.  Surfing the Internet, I often got the feeling that a lot of Spider-Man readers had enough of him; they thought he had been writing Amazing for too long.  After being a regular reader of The Amazing Spider-Man during my childhood, teen years, and young adulthood, I stopped being a regular reader in early 1990s.  I returned for a few years in the late 1990s and early 2000s.  I returned again as a regular reader about four years ago.

I like Dan Slott's The Amazing Spider-Man, which feels like classic ASM:  humor, action, cliffhanger thrills, and occasional heartbreaking and poignant stories, but he did recently exit the series after The Amazing Spider-Man #801.  Now, as the lead Iron Man writer, I think he will bring a similar tone to Tony Stark: Iron Man.  I am not crazy about that because I was perfectly happy with Brian Michael Bendis chronicling the adventures of the new Iron Man, Riri Williams/Iron Heart, in Invincible Iron Man and Victor Von Doom as Iron Man in Infamous Iron Man.

Posted by Leroy Douresseaux at 6:03 PM