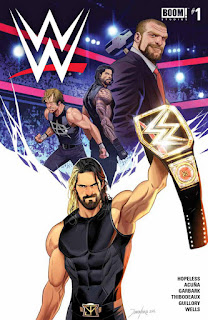 “Breaking of The Shield”

WWE (World Wrestling Entertainment) is an American integrated media company and entertainment company known primarily as a professional wrestling league.  It is also a media and entertainment brand that includes licensed products like toys and clothing... and comic books.

Beginning in 2016, BOOM! Studios published several “WWE” branded comic books, including an ongoing series, WWE, that ran for 25 issues from 2017 to 2019.  The main story in each issue of WWE was produced by the creative team of writer Dennis Hopeless; artist Serg Acuna; colorist Doug Garbark; and letterer Jim Campbell, as far as I can tell, for the duration of the series.

WWE #1 (“Breaking of The Shield”) opens with Seth Rollins, a member “The Shield,” one of the most dominant factions in WWE history, winning his latest match.  Seth, the ultimate opportunist, uses his victory to split with his partners in The Shield, Roman Reigns and Dean Ambrose.  Seth apparently betrays his mates at the best of the legendary wrestler, “Triple H,” the self-styled “King of Kings” who is now the authority in control of WWE.

Now, Seth is eager to prove that he is ready to fight for the “WWE Championship,” but his ambition puts him on a collision course with his former brothers.  And just what are Triple H's plans for Seth Rollins... really?

I never thought I would say this, but I liked WWE #1.  I was a wrestling fan as a 'tween, but after that, I rarely watched any matches on television.  In the time since then, I have sometimes watched a few minutes of professional wrestling produced by the WWE (formerly the WWF) and a few other pro wrestling organizations.  I find myself mildly interested, but watching pro wrestling would mean cutting into time I give to other entertainment and pastimes.

WWE #1 interests me because writer Dennis Hopeless tells an intriguing tale in the worlds of professional sports and in the entertainment industry.  That is the story of an ambitious ladder-climber who will betray any and everyone for his shot at making it to the top.  Such blind ambition can get you what you want, but that sometimes comes at the cost of losing things, both exterior (friends, family, colleagues, etc.) and interior (self-respect, peace of mind, pride, etc.).  By telling such a story, Hopeless sets up the WWE's atmosphere both of intrigue and backstabbing and of hope and glory, which could make for an engaging comic book series.

Artist Serg Acuna captures the brawniness and vitality of the wrestlers and also the pro wrestlers' propensity to strike quickly at opponents and adversaries.  Acuna's compositions have energy and suggest a sense of movement, and that is well served by Doug Garbark's tone-perfect coloring.  Letterer Jim Campbell pounds out the story in lettering that smartly tends to hang at the edges of the panels.  This doubles the power of the story, which is told in muscular illustrations and in Hopeless' straightforward dialogue and exposition.

I am not saying that WWE #1 is great, but it is quite good.  The highest praise that I can give it is to say that I will seek out WWE back issues.


Posted by Leroy Douresseaux at 5:54 PM