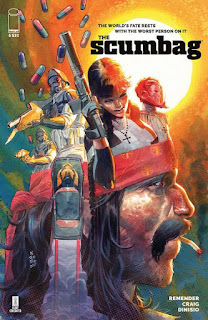 The Scumbag is a comic book series from writer Rick Remender.  Described as a “comedy espionage series” by publisher Image Comics, The Scumbag's tagline reads, “The fate of the world rests in the hands of the worst person on it!”  The series features a rotating crew of illustrators.  Artist Wes Craig joins colorist Moreno Dinisio and letterer Rus Wooton to complete the current creative team.

The Scumbag is Ernie Ray Clementine, a rundown, raggedy, filthy man.  He is a profane, illiterate, drug-addicted biker and ne'er-do-well with a fifth-grade education.  However, he meets Sister Mary and “Central Authority” and inadvertently absorbs the power-imbuing serum called “the Formula Maxima.”  Now, Ernie is the only thing standing between humanity and total Armageddon... because he has suddenly become the world's most powerful super-spy.

The Scumbag #5 opens in Scorpionus Mansion, the home of “The Prosoma,” the leader of the reactionary cabal, Scorpionus.  Sister Mary is kicking ass and stealing the information that will help her uncover Scorpionus' ultimate plan.  Meanwhile, Ernie Ray is all about making deals with the devil.  Their mission will take them to “Whole Green,” where Scorpionus makes cheap bio-fuel and hires poor people as employees.  What are they up to?  Well, both Sister Mary and Ernie Ray are in for some awful surprises.  Plus, Ernie Ray has to make a political decision!

I sometimes think that Scorpionus is the future of our United States, but I can laugh now because it's just a comic book.  And I recommend this comic book, The Scumbag.

I READS YOU RECOMMENDS:  Fans of Rick Remender, of mature comedy, and of reprobate-type anti-hero lead characters will want The Scumbag.

Posted by Leroy Douresseaux at 4:54 AM