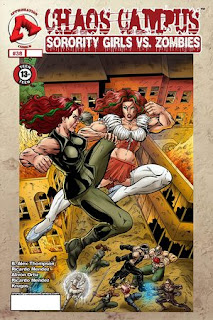 Chaos Campus: Sorority Girls vs. Zombies is the long-running zombie apocalypse comic book series from Approbation Comics.  Mixing in elements of comedy, horror, adventure, and magic, it is the creation of B. Alex Thompson.  The series is set during a zombie invasion and follows the adventures of three members of the sorority, Epsilon Alpha Zeta Upsilon (EAZY):  ass-kickin’ Jamie Lynn Schaeffer, brainy and magic-wielding Paige Helena Patton, and sexy goddess-type Brittany Ann Miller.

The series is written by Thompson.  It is currently drawn by Ricardo Mendez; colored by Alivon Ortiz; and lettered by Krugos.

Chaos Campus: Sorority Girls vs. Zombies #38 (“Atonement”) opens in the wake of the shocking discovering of alternate realities.  And alternate realities mean alternate versions of some of our favorite characters, especially the doppelgangers from one particular reality who are “Paige Hunters.”  Now our Jamie, Brittany, and Paige and company must join forces with the enemy, Tess Raven, Paige's “sister” who is really an alternate reality Paige.  Confused yet?

Well, welcome to the big throw down: Brittany versus Brittany.  Sometimes your greatest enemy is yourself.

THE LOWDOWN:  It is clear that B. Alex Thompson is building towards something big as he heads to the end of this series.  It is hard to accept that the end is coming because Chaos Campus has evolved since the first issue.  What was a zombie apocalypse comedy and parody of multiple film genres is now a complex genre-buster with enough characters for a video game franchise.

What else can I say that I have not already said.  Thompson is one of the most imaginative comic book writers working in comics over the first two decades of this still new century.  There is never a dull moment in Chaos Comics, and Thompson is the master of the cliffhanger.  Of course, Chaos Campus #38 offers a humdinger of an ending, one to assure the reader of returning for more

It's easy to join the fun, dear readers.  The details are at the bottom of this review.

I READS YOU RECOMMENDS:  Fans of zombies and of horror-comedies will want to try Chaos Campus: Sorority Girls vs. Zombies.


The text is copyright © 2022 Leroy Douresseaux. All Rights Reserved. Contact this blog or site for reprint or syndication rights and fees.

Posted by Leroy Douresseaux at 3:24 AM