I Reads You Review: CROQUIS (Yaoi) 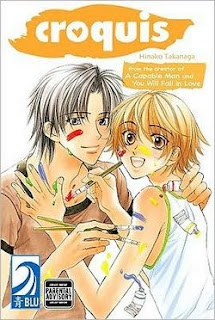 In the yaoi manga, Croquis, from creator Hinako Takanaga (A Capable Man

, You Will Fall in Love

), the ever-so-delicate subject of first love is explored. Young men not only struggle with their feelings, but also with coming out to the objects of their affections.

In the title story, Croquis, Nagi Sasahara always wanted to be a girl. Now, he works as a sort of drag queen-in-training at a gay bar called the Pink Cat. Nagi also has a part-time modeling gig at an art school. Why does he have two jobs? Nagi is saving money for a boob job-breast augmentation, so that he can have big breasts and appear more feminine.

The art school is where the problems begin. Nagi notices that one of the students, Shinji Kaji, stares at him. Kaji is certainly friendly enough, but Nagi is afraid of telling Kaji that he is gay or even revealing his biggest secret: that he is a fledgling drag queen. Nagi just can’t stop believing that Kaji doesn’t totally accept him for what he is.

Croquis, the graphic novel in this collection, plays at being the usual yaoi romance about a small of stature uke (bottom) smitten with a tall, dark seme (top). While it does have such romance comics tropes as lovers quarrels, spats with jealous friends, sleepless nights, etc., Croquis also addresses body image issues, coming out, and virginity, among others, giving this fictional romance a bit of an edge.

Some yaoi manga, which depict explicit sex between male lovers, can be sweet even when featuring randy sex scenes. Croquis is tart; it offers a happy ending, but never pretends that lovers, even soul mates, have an easy affair. It isn’t as if this is some powerful drama, because it doesn’t go into depth about anything, but just the fact that it makes coming out and body image issues such a part of the story is surprising.

The other two stories are a bit lighter and more standard yaoi. In the two part “On My First Love,” each of the two chapters is told from the point of view of one of the former classmates, Torii and Kamota. It is fun to see how each man bungled the romance in his own unique way. “Wish upon a Star” about Sei Mayama, a high school sophomore who hates stars (for the most ridiculous reason), is silly. The object of his affections, a senior named Daiki, is equally ridiculous, but the story is a nice read.

Overall, Croquis is another good yaoi manga from Hinako Takanaga. Her deft touch with character drama makes her worth watching.

Posted by Leroy Douresseaux at 11:17 AM