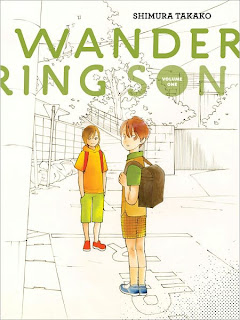 Fantagraphics Books is back in the manga-publishing game, but their new series does not feature boy heroes, aliens, monsters, robots, magic, super powers, or even love-starved teen girls.

Wandering Son is a manga from creator Shimura Takako that began serialization in 2002 in the manga magazine, Comic Beam. Fantagraphics Books recently began publishing English-language graphic novel editions of the series. Wandering Son follows fifth grader Shuichi Nitori, a boy who wants to be a girl, and his friend Yoshino Takatsuki, a girl who wants to be a boy.

Wandering Son Volume 1 introduces the two protagonists and their friends and family whose lives intersect with their own. Nitori is the new student in school and makes his first friend, Takatsuki. They bond over a dress that Takatsuki doesn’t want and gives to Nitori’s sister, Maho. Nitori wonders what he would look like in a dress, and soon his female classmates are encouraging him to wear them. Meanwhile, Takatsuki is exploring life as a boy by passing for a boy. When the fifth-graders put on a production of The Rose of Versailles for the farewell ceremony for the sixth graders, the play’s gender-bending brings gender issues out in the open.

Ostensibly a seinen manga (comic book for adult males), Wandering Son begins with characters that are preteens or preadolescents and is appropriate for readers of that demographic (although I say this as someone who isn’t a parent). I assume parents and guardians freaked out about any discussion or visual fiction depiction of issues relating to gender identity, puberty, and transsexuality would consider Wandering Son inappropriate for their preteens.

However, Shimura Takako tells this story in such a gentle, unobtrusive way, one might believe that this story flows naturally – as if it simply spun itself from nature and is the way it is supposed to be. I think Matt Thorn’s tidy translation, which goes down the mental gullet with such smoothness, is a big reason for how readable this is. Wandering Son is not flashy or aggressive, nor does it pander or try to be hip and stylish. Takako draws the reader in so quietly that some may be surprised to find themselves on a journey of discovery and exploration with these characters. It’s like seeing preadolescence for the first time or seeing it again through fresh eyes and a new perspective.

Takako’s simple approach to compositions and graphical storytelling entails sparse backgrounds and a cartoony method of figure drawing. The figures are striking in their simplicity, and their emotions and actions in the story are crystal clear. If only more comic books were so evocative and so clear in their storytelling like Wandering Son, an ideal comic book. Ages 8 to 80 will like Wandering Son.


Posted by Leroy Douresseaux at 8:24 AM