I Reads You Review: YOUNG JUSTICE #17 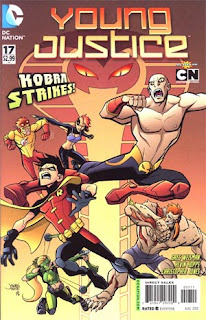 “Young Justice” focuses on the lives and adventures of the sidekicks and protégés of some of DC Comics’ biggest superheroes, which includes such young heroes as Artemis (Green Arrow), Robin, and Aqualad, among others. DC Comics is publishing a comic book adaptation of “Young Justice,” also entitled Young Justice.

Young Justice #17 (“Uncommon Denominators”) continues from #16. Batman and Robin, Flash and Kid Flash, and Green Arrow and Artemis take on Lord Naga-Naga also known as Kobra. Kobra, whose real name is Jeffrey Burr, has kidnapped his fraternal twin brother, Jason, in order to use him for a mystical rite that will create a giant cobra. While the adult heroes race off to stop the giant cobra from destroy Minneapolis, Robin, Kid Flash and Artemis take on Kobra Cultists and siblings, Mammoth and Shimmer. But Kobra’s dangerous mumbo-jumbo doesn’t stop with a giant cobra.

I can mostly say the same thing about Young Justice #17 that I said about issue #16. The art by Christopher Jones (pencils and inks) and Zac Atkinson (colors) is pretty. The compositions and page design are also good. The storytelling is excellent; it just makes my eyes want to follow the flow of the narrative and keep going back for second looks.

The story by Kevin Hopps and Greg Weismann, who are also writers on the “Young Justice” TV series, is the same as it was the last issue. It’s light on drama and emphasizes action and superhero fights. Nothing against Hobbs and Weismann, but this is a comic book and the storytelling strength is in the art… exceptionally so.

B+
Posted by Leroy Douresseaux at 7:27 AM