I Reads You Review: TUKI #1 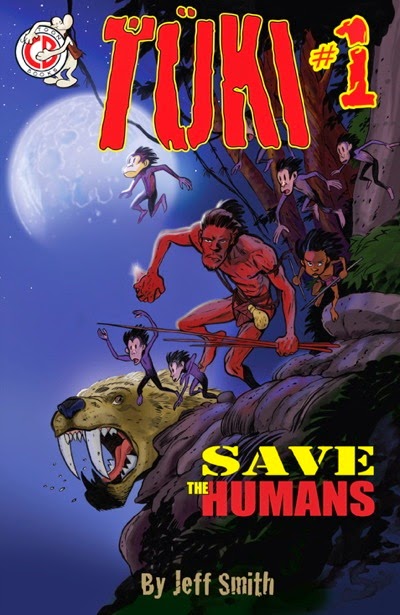 Tüki is the latest comics project from cartoonist Jeff Smith, the award-winning creator of the comic book series, Bone and Rasl.  Tüki began publication in late 2013 as a webcomic published on Smith's website, Boneville.com.  Tüki has already won a 2014 National Cartoonist Society's Reuben Award in the category of “Online-Long Form,” for webcomics.  About four months ago, Cartoon Books began publishing Tüki as a full-color comic book.  According to information found in the comic book, Tüki is the story of the first human to leave Africa.

Tüki #1 introduces the title character, Tüki, a male character.  Tüki belongs to one of the early hominid species, Homo erectus, which were apparently the first humans to harness fire and to leave Africa.  Tüki takes place during an as yet indeterminate time, but it seems to be several millenia after the Ice Age changed the world 2,000,000 years ago.  During his search for food and water, Tüki encounters a strange old man who belongs to another early hominid species, Homo habilus.  The old man insists that he has an important message for Tüki, or, at least, he thinks it's important.

The art in Tüki #1 is printed in the landscape format, so reading it is like trying to read several pages of a wall calendar.  Normally, I would be annoyed by this, except that the art is so beautiful, not only because of Smith's compositions, but also because of Tom Gaadt's lush and shimmering coloring.  As a visual experience, this reminds me of Walt Disney's classic animated feature film, The Lion King.

The story is intriguing.  It takes place in a part of human history in which so little is known, and that gives Tüki #1 the feel of a mystery story.  Smith's art captures the naturalism of living hand-to-mouth and by one's wits and the skills learned and experience gained.  This matter-of-fact way of survival adds to the sense of the unknown or even the unknowable.

There is always a sense of mystery about Jeff Smith's comics, as if there is a great unknown hiding far back in each panel, too far to be seen by the reader.  So I need to read more before I can definitively or at least solidly grade this, but I can say at this point that it's quite good.  I'm intrigued, so I will give it a tentative grade.


Posted by Leroy Douresseaux at 8:14 AM