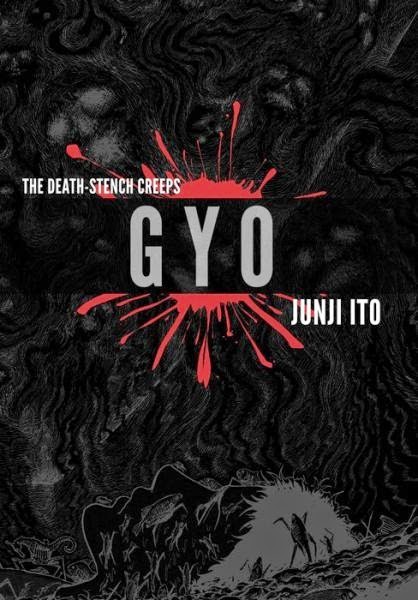 Gyo is a horror manga written and drawn by Junji Ito.  Gyo was originally serialized in the Japanese manga magazine, Big Comic Spirits, in 2001 and 2002.  Gyo follows a young man and his girlfriend who witness the beginning of an invasion of the Japanese island of Okinawa by mutated sea creatures.  They return to Tokyo only to discover that the invasion has followed them.

VIZ Media first published the series in English in 2003.  In 2007, VIZ released a second printing that collected Gyo in two paperback graphic novels.  VIZ Media is publishing Gyo in English again.  Gyo Deluxe Edition is a 2-in-1 book collecting both paperbacks in a single hardcover edition.  This definitive edition of Gyo features a new cover design and full-color end papers.  The Gyo Deluxe Edition will be published under the VIZ Signature imprint, is rated ‘T+’ for Older Teens, and will carry an MSRP of $22.99 U.S. and $26.99 CAN.  Gyo Deluxe Edition also reprints two short stories by Junji Ito, “The Sad Tale of the Principal Post” and “The Enigma of Amigara Fault.”  Both stories were reprinted in Gyo Volume 2.

Gyo finds a young man named Tadashi and his girlfriend, Kaori Sawahara, vacationing on the Japanese island of Okinawa.  Kaori is whiny and neurotic, and that is why Tadashi mostly ignores her complaints about a terrible smell.  After a peculiar encounter near their hotel, they find a strange fish with spider-like legs in their room.  Soon, Tadashi and Kaori discover that the horrible death-stench is just the first sign that many strange denizens of the sea are invading the island.  They return to Tokyo only to discover they have escaped neither the stench nor the grotesque visitors from the sea.

This is my second reading of the Gyo manga.  I think that no matter how times I read this masterpiece of 21st century horror it will retain its ability to unsettle me.  Junji Ito is the illustrator that H.P. Lovecraft (one of Ito's influences) would have wanted to bring his writing to life as black and white drawings.

Graphically, Gyo has the power to transform the reader's mind.  It actually made me feel itchy; in fact, many sequences made me feel like I immediately needed a hot shower or two.  The chapter, “Shark Attack,” is one of the scariest, most visually striking comics sequences that I have ever read.  It is genius.  I'm jealous.  I wish I could create a comic book that did what Gyo does to me.

I recommend Gyo Deluxe Edition without hesitation or qualification to fans of horror comic books.  It is a masterpiece by one of the international masters of the comics medium.  Anyone who has ever read and enjoyed a horror comic will find joy in Gyo Deluxe Edition, and those who have never enjoyed horror comics will finally discover one that they can like.


Posted by Leroy Douresseaux at 4:49 AM