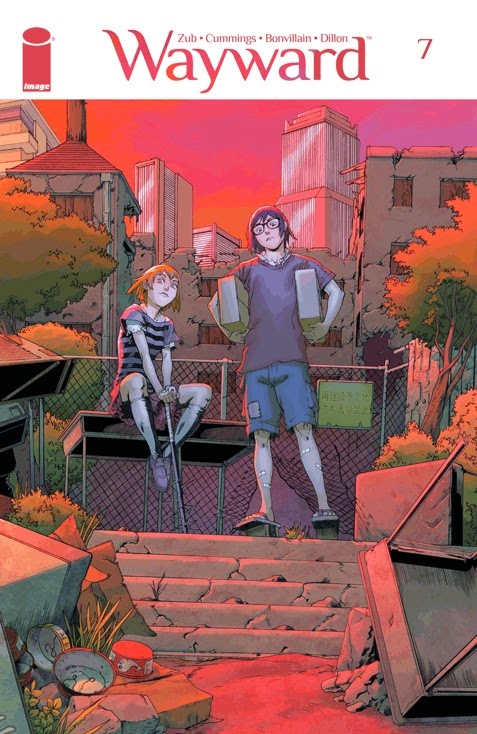 The latest issue of Image Comics' Wayward is in comic book shops today (Wednesday, April 29, 2015).  The comic book, which launched late last summer, is set in Japan and features those creatures of Japanese folklore, yokai.

Wayward is the creation of writer Jim Zub and artist Steve Cummings.  Wayward focuses on Rori Lane, a half-Irish/half-Japanese teen girl, who is trying to start a new life in Japan with her mother, Sanae.  Instead, Rori finds herself connected to the magic and ancient creatures that lurk in the shadows of Tokyo.

Wayward #7 (“Chapter Seven”) continues the focus on Ohara Emi, a high school girl to whom most people pay little or no attention.  Now, she does have people paying attention to her, Ayane and Nikaido, two teens who are part of Rori Lane's little monster-hunting band.

With the arrival of Obon, the Japanese festival of the dead, Ayane wonders what has happened to Rori and Shirai, who were lost during a battle with several powerful creatures.  Meanwhile, these “corrupted children” are the subject of a meeting between Nurarihyon and other yokai, who are themselves in for quite a surprise.

In a bid to keep the word going about his comic book, Wayward writer/co-creator, Jim Zub, sent out an advanced review PDF copy of Wayward #7.  I like this comic book and support it by buying copies, even after reading it for free.

Recently, someone said that Wayward is the next Saga.  I wouldn't know, as I have yet to read Saga, but if it is as good as Wayward, then, I must read it immediately.  This seventh issue of Wayward is, so far, the best issue of the new story arc.  Sometimes, comic books about magic don't feel very magical.  Like The Sandman, this series has a sense of enchantment about it that is... well, enchanting.  I heartily recommend... Oh, the hell with it.  Read this, dammit!

[Wayward #7 contains another engrossing essay, “Obon – The Festival of the Dead,” by Zack Davisson (@ZackDavisson).]


Posted by Leroy Douresseaux at 5:44 PM