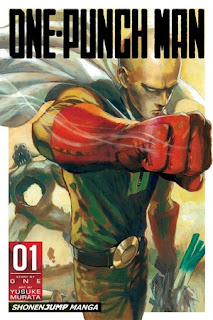 Created by manga creator, ONE, One-Punch Man began as a web comic.  It quickly went viral and garnered over 10 million hits.  Japanese manga publisher, Shueisha (which is also VIZ Media's parent company), eventually secured the publishing rights to the series.  One-Punch Man was remade, with acclaimed manga artist, Yusuke Murata, best known for his work on the football series, Eyeshield 21, as the series' new artist.

As One-Punch Man, Vol. 1 (entitled One Punch; Chapters 1 to 8) begins, Saitama is in danger of being bored to death.  He just beat the latest city-wrecking villain with one punch.  He beats another, and another, and even an invasion of subterranean monsters.  Then, a girl who controls a mega-mosquito swarm and a cyborg teen named “Genos” arrive in City Z.

Digital manga readers already have access to Vols. 1-7 of the One-Punch Man manga via VIZManga.com and the VIZ MANGA App for the iPad®, iPhone® and iPod® touch, Android-powered smart phones and tablets.  Those same volumes can also be purchased through the Nook, Kindle, Kobo, comiXology, iBooks and GooglePlay stores.

I love the superhero anime, Tiger & Bunny, and its manga adaptation, and I love One-Punch Man because it is a blast of superhero fun done in a different way.  Tiger & Bunny is a Japanese take on superheroes that is eccentric, but would not really seem like the odd-comic-out if placed among American superhero comic books.

One-Punch Man is a shonen battle manga with a superhero as its lead character and protagonist, but all the other characters (at least early in the narrative) are staples of shonen action fantasy.  One-Punch Man's writer, who goes by the name, ONE, unleashes his inner kid as he unleashes a series of monsters, demons, minions, man-beasts, and evil men on one hapless city after another.  Mass mayhem and destruction ensue.

Artist Yusuke Murata brings ONE's imagination to life in graphical storytelling that epitomizes the “dynamic storytelling” that Stan Lee pitched with gusto in How to Draw Comics the Marvel Way.  Also, the art is so pretty, so detailed, and so full of texture and magnitude.  I love this manga, and I think that if you keep reading past the first three chapters, you will love it, also.

Posted by Leroy Douresseaux at 12:26 PM