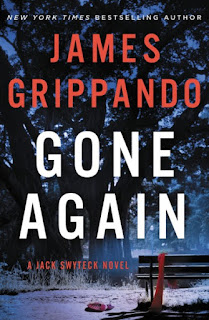 Gone Again is a 2015 crime and mystery novel from author and attorney, James Grippando.  It is also the thirteenth novel featuring Grippando’s Miami-based, criminal defense attorney, Jack Swyteck.  In Gone Again, Swyteck takes on his first death-row client since The Pardon.

Three years ago, 17-year-old Sashi Burgette vanished on her way to school.  The night after her disappearance, ex-con Dylan Reeves was stopped for drunk driving,  The police found Sashi's panties in his trunk, still damp with Reeves' semen.  The police videotaped Reeves' drunken explanation, which they spun into a confession, sealing his fate.  As the novel begins, Reeves is just days away from being executed.

To help some old friends, Jack Swyteck has rented office space at the old house where the Freedom Institute is located.  Swyteck got his start at the Institute, which defends death-row inmates, but he does not plan on doing that kind of work again.  Fate, however, brings Debra Burgette, the mother of Sashi, to Swyteck's door.

Debra claims that Sashi has been calling her, which the police have dismissed as a cruel hoax.  Swyteck feels compelled to take her case and to help the Freedom Institute as it tries to get a stay of execution for Dylan Reeves.  Meanwhile, the State Attorney refuses to consider new evidence in Reeves' case, and the governor of Florida has signed Reeves' death warrant.  An innocent man may be executed, and it is up to Jack Swyteck and his colleagues and friends to find Sashi or find answers.  But the truth is complicated and the case is full of twists.  Meanwhile, Swyteck's wife, FBI Agent Andie Henning, is in the middle of a difficult and dangerous pregnancy.

I read my first Jack Swyteck novel, Blood Money, a few years ago, and followed that up with Black Horizon.  Last year, James Grippando offered readers two non-Swyteck novels, the ruthless Cane and Abe and the heist novel, Cash Landing.  I enjoyed Cane and Abe, but I found Cash Landing's lead character to be hard to like, which spoiled the book for me.

I was thrilled when HarperCollins offered a galley/review copy of Gone Again, after I learned that it was a new Swyteck novel.  Like Blood Money, Gone Again is twisty and shocking, and although the book was a late winter release, it is the perfect summer potboiler.  The reader will race through this page-turner, which is full of courtroom theatrics, depraved bad guys, and lurid family melodrama.

James Grippando is not a prose stylist, but his clean, efficient storytelling suggests that he is an author who truly enjoys telling his audience a riveting story.  Gone Again presents what is essentially an ending of one part of Swyteck's life and also a beginning of a new life, one that may be unknown even to the author.  Whatever it is, wherever this series goes, Grippando's tales of suspense have earned him a devoted audience that will be waiting around a campfire the next time he decides to tell a story.

Posted by Leroy Douresseaux at 4:55 AM