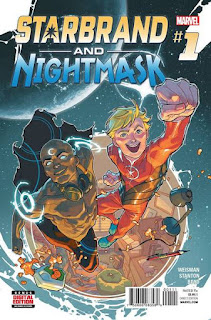 In 1986, Marvel Comics introduced the “New Universe,” a line of comic books set in a universe that was separate from the main “Marvel Universe.”  This universe was to feature super-powered individuals that skewed towards being more realistic than Marvel's main superhero characters.

One of the first New Universe comic books was Star Brand #1 (cover dated: October 1986), which was created by then Marvel Editor-in-Chief Jim Shooter.  The “Star Brand” was a star-shaped tattoo-like mark that gave the one who boar the mark infinite, god-like powers, limited only by the wielder's imagination (a rift on a Green Lantern's “power ring”).  Kenneth “Ken” Connell, a mechanic from Pittsburgh, was the first to receive the Star Brand.

Debuting in the second month of the New Universe launch was Nightmask #1 (cover dated: November 1986), created by Archie Goodwin.  The first Nightmask was Keith Remsen, who had the power to enter people's dreams telepathically.

In 2006, Marvel Comics published a re-imagining of the New Universe, entitled newuniversal (February 2007), and it was designed by Warren Ellis.  The characters' powers were based on their possession of glyphs, which is what the “Starbrand” became.  The launch of the “All-New, All-Different Marvel” unites two characters from newuniversal, Starbrand and Nightmask, in a new comic book series.  Entitled Starbrand and Nightmask, the series is written by Greg Weisman; drawn by Domo Stanton; colored by Jordan Boyd; and lettered by Clayton Cowles.

Starbrand and Nightmask #1 (“Matriculation”) opens with Starbrand (Kevin Conner) and Nightmask (Adam) exiting “The Superflow” and returning to Earth, specifically China.  After a battle and an offer to join the New Avengers, Starbrand discovers that Nightmask has enrolled the two of them at Empire State University (E.S.U.).  They are now incoming freshmen Kevin Conner and Adam Blackveil.  Adam wants the both of them to have more interaction with humanity, but the superhero stuff will not go away just because they are now college students.

Writer Greg Weisman offers a story that is appropriate for middle school readers.  As a writer-producer of animated television series, Weisman knows how to write juvenile action-adventure fantasy.  Starbrand and Nightmask #1 certainly has that antiseptic quality that meets the conservative standards of most animated content on American cable networks.

The art by Domo Stanton has a generic juvenile/young readers graphic novel quality.   Starbrand and Nightmask #1 is practically indistinguishable from the run-of-the-mill graphic novels from First Second or Scholastic.  Even the cover art Yasmine Putri has a golly-gee-whiz quality.  As I said, this isn't bad so much as it is unimaginative and doggedly harmless.  Good luck with this, Marvel

Posted by Leroy Douresseaux at 5:38 AM