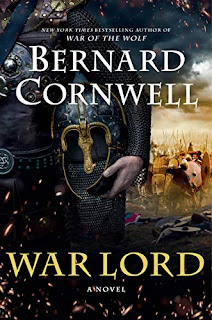 War Lord is a 2020 novel from Bernard Cornwell, a bestselling British author of historical novels.  This is the thirteenth and final book in Cornwell’s “Saxon Tales” series, his epic story of the making of England and his continuing story of pagan Saxon warlord, Uhtred of Bebbanburg.  “The Saxon Tales” series is also known as “The Last Kingdom” (named for the first novel in the series).  War Lord finds Lord Uhtred torn between protecting what is his and his sworn oath to a young king.

As War Lord opens, Lord Uhtred is ruling his part of Northumbria from his family's fortress, Bebbanburg.  With a new woman, Benedetta, and a loyal band of warriors by his side, his household is secure.  Well, he should be secure, but beyond the fortress, a battle for power rages.

Young King Æthelstan has done something he swore to Lord Uhtred that he would never do.  Uhtred is the man who is most responsible for putting him on the throne and made him “Anglorum Saxonum Rex” – King of the Angles and the Saxons – King of Wessex, of East Anglia, and of Mercia.

That promise that Æthelstan has broken is that he has invaded Northumbria.  He wants to be “Monarchus Totius Britanniae,” King of All Britain, and the invasion is his first stop.  To the north, however, is King Constantine of Alba (Scotland) and other Scottish and Irish leaders who are all looking to expand their territory.  Possessing Northumbria will do that, and the region can act as a buffer zone between the Scots, Danes, Norse, and Irish lands and the Saxon lands.

Uhtred is faced with an impossible choice.  He can stay out of the struggle, but each side will think that he has made a deal with its enemies.  Or he can throw himself into this power struggle that will eventually result in the most terrible battle Britain has ever experienced.  It is a battle that could realize the dreams of King Alfred, King Edward (his son), and King Æthelstan (his grandson).  That dream is to create one realm for everyone who is Christian and who speaks the “Ænglisc” tongue, a kingdom to be called “Englaland” (or England, of course).  Will Uhtred, the War Lord of Britain, survive this crisis and hold onto Bebbanburg?

THE LOWDOWN:  I have read the seventh through this thirteenth entry in “The Saxon Tales” series.  I love these books, and as soon as I reach the last page of one book, I dearly wish the next book was immediately available.  George R.R. Martin, the author of A Song of Fire and Ice (the inspiration for HBO's Emmy-winning “Game of Thrones” television series), says that Cornwell writes the best battles scenes he has ever read.  I can say that Cornwell's “Saxon Tales” are kind of like a real life “Game of Thrones,” with Cornwell taking creative liberties with the story of the creation of England.  And yes, Cornwell's battle scenes are breathtaking.

Well, it is pointless to wish for more.  War Lord is the magnificent finale to the epic story of how England was made.  After writing reviews for seven of these books, I have practically run out of ways to praise Cornwell.  The series just never ran out of steam, as Cornwell never ran out of ways to depict political and courtly intrigue and epic brutal battles.

War Lord borrows elements from the previous books, and wraps up several story lines.  There is family drama and tragedy.  There is sea-faring adventure.  Scores are settled, and an epic battle decides the fate of kings and kingdoms.  Heck, this book is almost two years old, so I can spoil a few things.  Uhtred is alive at the end of this book, but is apparently retired.  Thus, we get a happy ending, a bittersweet one, of course.  I am sure that I am not the only reader who wants more.

I READS YOU RECOMMENDS:  Fans of historical fiction and of Bernard Cornwell must have War Lord.


The text is copyright © 2022 Leroy Douresseaux. All Rights Reserved. Contact this blog or site for syndication rights and fees.

Posted by Leroy Douresseaux at 2:59 AM