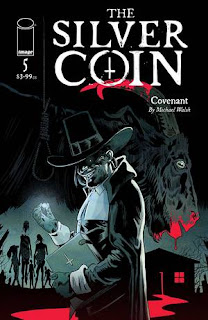 The Silver Coin is a horror comic book anthology published by Image Comics.  It is the creation of artist Michael Walsh and writers Ed Brisson, Jeff Lemire, Kelly Thompson, and Chip Zdarsky.  Each issue of this five-issue miniseries tells a tale of terror that is set in a supernatural world in which the mysterious “Silver Coin” changes the lives of those who take possession of it.  The fifth issue is written by Michael Walsh; drawn by Walsh with Gavin Fullerton; colored by Walsh and Toni Marie Griffin; and lettered by Walsh.

The Silver Coin #5 (entitled “Covenant”) goes back to the origin of the coin and its cruel curse.  In a small New England village, Rebekah Goode helps her neighbors with her special powers.  When a roving, witch-hunting minister, Cotton Dudley, comes to town, he manages to get Rebekah's friend, a simple girl named Martha, to speak ill of her friend – for the price of a silver coin.  Now, Dudley and Martha will see the true extent of Rebekah's power.

THE LOWDOWN:  As I wrote in my reviews of the first four issues of The Silver Coin, I am a big fan of horror comic book anthologies.  That includes everything from the classic EC Comics titles to later titles like DC Comics' Ghosts and House of Mystery, Kitchen Sink Press's Death Rattle, and Approbation Comics' Amour, to name a few.

I enjoy these one-off, standalone tales, but I wouldn't mind some more narrative meat on the bones of the stories of the Silver Coin.  This miniseries finale, “Covenant,” is a bit of fun, but the truth is that this 24-page tale does what classic horror comics short stories did in six to eight pages.  Still, let's see where the coin shows up next.

I READS YOU RECOMMENDS:  Fans of classic horror comic book anthologies will want to spend The Silver Coin.

Posted by Leroy Douresseaux at 2:42 AM