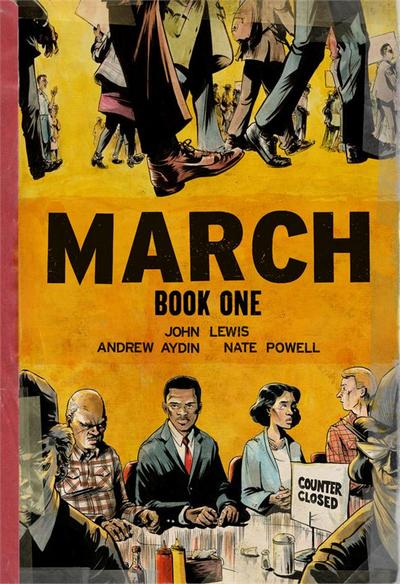 Congressman John Lewis is Georgia’s Fifth Congressional District Representative (GA-5, Democrat).  Lewis was also one of the “Big Six” leaders of the American Civil Rights Movement (with the others being Rev. Martin Luther King, Jr., James Farmer, A. Philip Randolph, Roy Wilkins, and Whitney Young).  Before such fame and accomplishments, he was born John Robert Lewis in February 1940 to sharecropper parents, Willie Mae (Carter) and Eddie Lewis.  His early life, from farm boy to activist college student, is the focus of March: Book One.

March: Book One is a comic book written by John Lewis and Andrew Aydin, drawn by artist Nate Powell, and published by Top Shelf Productions.  This is the first of three graphic novels recounting the life of Congressman John Lewis.  March: Book One is both a riveting history of the United States during the second half of the 20th century and an evocative personal story of a famous man’s life.

Lewis’ lifelong struggle for civil and human rights includes the key roles he played in the historic 1963 March on Washington and the 1965 Selma-Montgomery March.  March will apparently focus on Lewis’ personal story and on the highs and lows of the broader movement for civil rights in the U.S.

March: Book One opens on the Edmund Pettus Bridge in Selma, Alabama (part of the 1965 Selma-Montgomery March) on March 7, 1965, the date that would become known as “Bloody Sunday.”  The story moves forward to January 20, 2009, and sees Lewis share the story of his past with a mother and her two young sons.  The narrative moves back in time again, to the 1940s, where in first person, Lewis recounts the early events and incidents that shaped his life.

March: Book One’s co-writers John Lewis and Andrew Aydin recount Lewis’ life on a 110-acre cotton, corn, and peanut farm in Pike County, Alabama.  This section of the narrative covers Lewis’ time as a junior chicken farmer and chicken rights activist (of sorts) up to 1954.  Both reminiscence and personal history, it is as if Lewis and Aydin are spinning tales from the world of young John Lewis, yarns of childhood that go beyond the personal and intimate about Lewis and into the small world that his home and community.  So we learn about his family, their wishes, small incidents (like trading chickens for much-needed flour and sugar), their way of life (having to miss school to work the fields), and transformative moments (Lewis’ trip “up north” to Buffalo with his maternal uncle, Otis Carter).

In 1954, momentous events in the larger world outside of Lewis’ life as farm kid and ambitious country boy begin to transpire.  The Supreme Court rules “separate but equal” unconstitutional in Brown vs. the Board of Education of Topeka.  A young preacher named Martin Luther King, Jr. emerges.  Two adult white men kill a black child named Emmett Till, are acquitted of their crime, and publicly brag about (making them the original George Zimmermans).  On December 1, 1955, Rosa Parks refuses to give up her seat on a city bus.  The Civil Rights Movement is gaining momentum.

Lewis becomes a part of that movement when he becomes a student at American Baptist Theological Seminary.  He attends a workshop on non-violence taught by Jim Lawson.  Lewis later helps to organize sit-in demonstrations at segregated lunch counters in Nashville, Tennessee.  That begins with test sit-ins in 1959 and launches with the history changing real deal in February 1960, which culminates into an eventual public confrontation with Mayor Ben West of Nashville.

Obviously, John Lewis is a man who has made history.  However, in the humble and gentle way in which Lewis and Aydin tell this story, Lewis is as much a witness to history as he is a participant.  Lewis, the character in March: Book One, is not the hero who changed things.  He is also a participant, one among many; leader and organizer, yes, but also part of a fellowship.  This striking modesty brings the reader into the story, and in the retelling, allows the reader to be a quasi-witness to history.

I don’t think that I have ever seen any work by cartoonist and graphic novelist Nate Powell that was not published in black and white.  Powell’s black and white comics are not about the contrast of black and white – negative and positive space.  His storytelling is a graphical space in which black and white blends and unites to create nuance, subtlety, texture, complexity, ambiguity, and mystery.  For March: Book One, Powell creates a visual storytelling tapestry that is at once grand, earth-shattering history, but also singularly, personally intimate and deeply human.

In March: Book One, Lewis, Aydin, and Powell have created a story that wrestles grand history down to size so that it is not too big for anyone to grasp.  In this small-sized manner of storytelling, we can see the humanity in and importance of all the participants in our story we call history.

For more information about March: Book One and to read a 14-page preview, visit here or http://www.topshelfcomix.com/march


Posted by Leroy Douresseaux at 4:19 AM