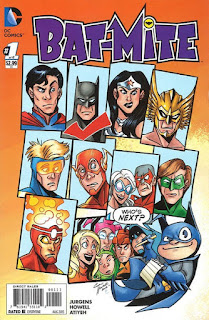 Bat-Mite is a  DC Comics character that is part of the Batman line of comics.  Bat-Mite was created by writer Bill Finger and artist Sheldon Moldoff and first appeared in Detective Comics #267 (cover dated:May 1959) in the story, “Batman Meets Bat-Mite.”

Bat-Mite is an “Imp” character that is similar to Superman's adversary, “Mister Mxyzptlk.”  However, Bat-Mite idolizes Batman, but is a nuisance to Batman because of his impish activities.  Bat-Mite's appearance is that of a small, child-like man, and he possesses seemingly near-infinite magical power.

Now, DC Comics has a new thang going on, and it is a publishing initiative called “DC You.”  It's all about us, the readers... actually, the fans.  June 2015 alone sees the launch of over 20 new titles.  One of them is a new comic book feature Bat-Mite.  It written by Dan Jurgens, drawn by Corin Howell and Andres Ponce, colored by Mike Atiyeh, and lettered by Tom Napolitano.

Bat-Mite #1 (“Transplant”) begins with the banishment of Bat-Mite, presumably from his home dimension.  When next we see him, Bat-Mite is interfering...err... helping Batman foil two criminals.  Things aren't what they seem, as Bat-Mite learns when he meets Doctor Trauma.  And Doc Trauma's latest Frankenstein-like scheme is positively... savage.

I laughed in derision when I read that DC was launching a Bat-Mite comic book, but I have to admit that I was curious about this new series.  I have loved Bat-Mite since I first encountered the character on “The New Adventures of Batman” Saturday morning cartoon series (Filmation, 1977).  I was later surprised to see that this new Bat-Mite comic book was only a six-issue miniseries, which makes sense, I guess.  I doubt that Bat-Mite is a character that can support an ongoing series.

Now, I won't be fake and claim that Bat-Mite 2015 is a great comic book, but I do like it a lot.  Dan Jurgens is an underrated comics creator.  Someone once described Jurgens as the kind of creator whose steady output of professional work kept the comics business operating in between brief but outstanding bursts of greatness that guys like Frank Miller dropped in to offer once a year or so (not the writer's exact words).

Well, Dan Jurgens – Mr. Professional – strikes the right tone for Bat-Mite as a character.  He is a pest, a confidant nerd.  He is funny because of his know-it-all superiority and sarcasm, but not necessarily because he is silly.  That is why I think that Jurgens could do much with this character if he were given the chance to produce a series of Bat-Mite miniseries.

Corin Howell and Andres Ponce make a good art team.  Howell's storytelling strikes the right tone because she maximizes physical comedy, especially facial expressions.  Howell makes Bat-Mite a character with believable motivation, attitude, and personality.  That is not necessarily easy.  Bat-Mite is always on the edge of being nothing more than a plush toy.

So, I am in with Bat-Mite for the long haul, or whatever kind of haul six issues make.


Posted by Leroy Douresseaux at 10:51 AM