Review: TO KILL A MOCKINGBIRD 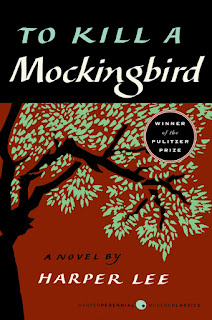 TO KILL A MOCKINGBIRD
HARPCOLLINS/HarperPerennial – @HarperCollins

First published in 1960, To Kill a Mockingbird is a novel from author Harper Lee.  The book won the Pulitzer Prize for Fiction in 1961.  It was adapted into a film drama, To Kill a Mockingbird (1962), directed by Robert Mulligan and written for the screen by Horton Foote.  The film would go on to receive eight Academy Award nominations and win three at the 35th Academy Awards ceremony on April 8, 1963, including a best actor Oscar for Gregory Peck as Atticus Finch.

To Kill a Mockingbird is set in the Deep South of the early 1930s, and, if my “figurin'” is right, it opens in 1932 or thereabouts.  The location is the small town of Maycomb, Alabama, the county seat of Maycomb County.  The narrator of the book is the presumably adult Jean Louise Finch, who was called “Scout,” as a child.  Jean Louise's story is a coming-of-age tale about a particular time in her childhood.  The story begins when Jean Louise/Scout is six and ends when she is 10.

Scout lives with her widower father, Atticus Finch, an attorney and Alabama state legislator; and her older brother (by three years), Jeremy Atticus Finch, called “Jem.”  They have a live-in housekeeper and caretaker, an African-American woman named Calpurnia.  Scout and Jem befriend Charles Baker Harris, called “Dill,” a boy who is a year older than Scout and is from Mississippi.  Dill visits every summer, staying with an aunt, Miss Rachel Haverford, who lives in Maycomb.

The trio of Scout, Jem, and Dill spend their summers playing and having adventures.  Their biggest obsession is discovering the mystery of a next-door neighbor, Arthur “Boo” Radley.  Their determination to get a look at “Boo,” who has rarely left his home in years, takes up much of the early part of the book.

The turning point comes when Scout and Jem's father, Atticus, is appointed the public defender of a young Black man, Tom Robinson, who is unjustly accused of and criminally charged with raping a young white woman.  The trial occurs in the summer of 1935, and Scout witnesses the quite heroism of her father, as he struggle for justice in a courtroom where the weight of history and also irrational hate are bigger obstacles than the prosecution.

After 50+ years of praise and of being a “beloved classic,” To Kill a Mockingbird does not need to be reviewed... one would think.  However, I believe that this book should never be forgotten.  It should be discussed not only in schools and in other academic settings, but also in the larger world of people who pay attention to books and to their importance.

To Kill a Mockingbird is filled with wisdom, but not the homespun kind that is little more than an old adage.  What this novel has to say, one has to engage; the reader has to think about it and to ruminate on its passages and lessons.  For instance, there is the following passage in which Atticus informs his children:  “Shoot all the bluejays you want, if you can hit 'em, but remember it's a sin to kill a mockingbird.”

I never realized until my second reading that Tom Robinson, accused of rape by a pitiable white trash teenage girl and her cowardly, lazy, shiftless white trash father, is this story's mockingbird.  You see, all a mockingbird does is sing, while other birds might be pests.  The mockingbird is innocent, and it is a sin to kill an innocent – a truth so plain that most people are blind and ignorant to it.

I had a English lit instructor (who may have been a professor) who said that society hid dangerous books away in the children's literature section.  She used Lord of the Flies, as well as To Kill a Mockingbird as examples.  I think To Kill a Mockingbird is a dangerous novel.  The reason is simple.  This novel's depiction of injustice and blind and violent hate in the Deep South; its portrayal of honor and quite heroism; and its examination, measure for measure, of the irrationality of the White adults of Maycomb's attitudes toward race and class are all seen through the eyes of child, Scout's.

Jean Louise tells the story through her younger self, Scout, and Scout sees the world in a matter of fact way, innocently free of the dressings of subterfuge and hypocrisy.  Of course, it takes a child to catch an adult saying one thing and meaning another.  Late in the novel, Scout attends a tea party held by her Aunt Alexandra (Atticus' sister, who moves in with the family).  One of the women attending mentions how horrible it is that Adolf Hitler is having Jewish citizens arrested and imprisoned simply for being Jewish.  A child whose father is defending a wrongly accused Black man, without guile, will wonder why that same woman cannot see the plight of her Black neighbors with sympathy.

This is why To Kill a Mockingbird is a dangerous book.  Harper Lee's narrator is a child who views the beauty of the world as plainly as she sees the lies, inequities, violence, hatred, and racism.  Unlike an adult, Scout won't try to justify injustice the way adults do so that they can live with themselves.  Any American who reads books must read To Kill a Mockingbird at least twice in their adulthood.


Posted by Leroy Douresseaux at 4:18 AM