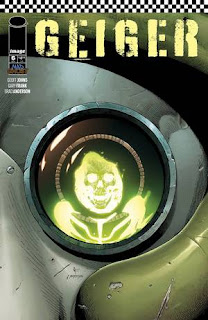 Geiger is a comic book series from writer Geoff Johns and artist Gary Frank.  Published by Image Comics, Geiger is set on a dying Earth in the years after a nuclear war ravaged the planet and focuses on a “walking bomb” hero.  Colorist Brad Anderson and letterer Rob Leigh complete the series' creative team.

Geiger is set 20 years after the nuclear conflict known as the “Unknown War” ravaged the planet, turning Earth into a dying world.  In the state of Nevada, desperate outlaws battle for survival in a world of rapidly disappearing resources and supplies.  In Boulder City, Nevada, there resides the fearsome man known by many names:  Joe Glow, The Meltdown Man, and the Walking Bomb, to name a few.  But before the war, he was simply a man named Tariq Geiger.  So who or what is Geiger, now?

Geiger #6 (“Man vs. Machine”) opens with the narrator providing a grand intro for the latest chapter of the tale of Geiger, which includes a bit of a side story about “The Unnamed.”  Back to 2050, the King of Vegas has a map and plots his planned conquest of NORAD.

Meanwhile, in NORAD, Geiger and the children, Hailee and Henry, race to escape this prison, and Hailee is forced to give Henry some bad news.  Geiger is determined to protect these children, but in order to do that he will have to battle “Junkyard Joe.”  And this is one opponent who won't go down as easily as the others did.  Plus, Hailee makes a friend and a benefactor (of sorts) in Rick.

THE LOWDOWN:  As first issues go, Geiger #1 was mostly an introduction, kind of like a prologue.  It introduced the title character, Geiger, giving readers a look at who he was in the past and a glance at who he is now.  By the time we reached this sixth and final issue of the first volume and story arc of Geiger, we have a lead character that is revealed and world that is more revealed to the readers.

Geoff John brings all the emotions, feelings, thrills, and scares of the previous issues and funnels them into the series' best issue yet.  All I can say is that it was a blast, a thrill, and a joy to read, and it also left me anxious to discover what comes next.  Apparently, there will be a spin off and a “Geigerverse.”

As Geiger has progressed, Gary Frank's art captured the emotions and passions of intimate moments and the crazy violence of the action scenes.  Here, Frank delivers page after page of explosive power, particularly in the Geiger vs. Junkyard Joe battles.  Brad Anderson's colors don't just capture the best moments; they also make many great moments.  Rob Leigh's lettering keeps this story steady through several violent showdowns and maintains a balance in this volatile issue.

This creative team delivers a winner in Geiger #6, and they also leave us wanting more.  I did not know what to expect from Geiger in the beginning, other than it being another star-driven creator-owned comic book project from Image Comics.  Now, that I know what I know, I confident in recommending this exceptional series.

I READS YOU RECOMMENDS:  Fans of Geoff Johns and Gary Frank will want to check out Geiger.

Posted by Leroy Douresseaux at 3:12 AM