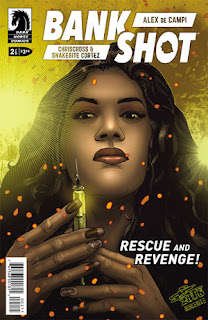 Bankshot is a new comic book series from writer Alex de Campi and artist ChrisCross.  Snakebite Cortez is the series colorist and de Campi is the letterer.  Published by Dark Horse Comics, this five-issue miniseries focuses on an anti-hero. Part modern-day Robin Hood, part terrorist, or both, Marcus King is on a mission of revenge.

Bankshot #2 takes place in two time periods.  First, a decade earlier, Marcus King was left for dead after the CIA tried to kill him during a mission in North Africa.  He awakens a paraplegic in a hospital in Tunisia, where a nurse, Leah Soraya, cares for him.  After another attempt on his life, Marcus finds shelter in facility where a Soviet scientist may have the miracle tech to restore Marcus.

In the present, Frank, a special agent with the Federal Bureau of Investigation (FBI), plots to stop Marcus, who has stolen untold millions in cash and property from government agencies and wealthy corporations and individuals connected to the FBI and CIA.  Meanwhile, Marcus' incredible body is a subject of interest to a group of scientists and engineers.

Like a Tim Duncan bank shot, the Bankshot comic book is more hit than miss.  [If you don't know Tim Duncan, try Wikipedia and sometimes ESPN Classic.]  Alex de Campi and ChrisCross are, as they say, killing it... and killing it again.

It seems as if some of the best elements of the Blade, Jason Borne, James Bond, and Mission: Impossible movies are blended with a dash of the Iron Man comic books and movies to create something that looks different – for obvious reasons – and is unique.  This is also a comic book that takes on the troubles in the Middle East and North Africa and Russia and Eastern Europe and connects it to the corrupt American security state.  Then, on the pop comic side, Bankshot gives us a hero who can destroy whatever is rotten in international rottenness.

I like that Alex de Campi has focused on Marcus King's past from a decade earlier to establish him as a character, while only serving up the “super” Marcus in small doses.  De Campi is making us care about the man, who is just as important as the colorful hero man.  ChrisCross' storytelling captures all the moods and the switches in pace and setting, and visually and graphically creates a balance between the the drama and suspense and the wild action and violence.  Even after two issues, it is obvious that Bankshot should continue past this miniseries.


The text is copyright © 2017 Leroy Douresseaux. All Rights Reserved. Contact this site for syndication rights and fees.

Posted by Leroy Douresseaux at 6:00 PM