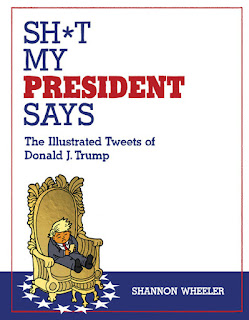 Sh*t My President Says: The Illustrated Tweets of Donald J. Trump is a 2017 book of cartoons from award-winning cartoonist, Shannon Wheeler (Too Much Coffee Man).  The book collects a selection of President Donald J. Trump's tweets of which Wheeler provided an accompanying illustration for context, illumination, or otherwise.

Before he (tragically) became President of the United States, Donald Trump was a real estate “mogul,” controversial figure, media personality, and anti-African-American bigot who once demanded the summary execution of five young men of color who were accused of a crime they did not commit.  Trump joined social media site, Twitter, in 2009 and began tweeting, first to promote himself, his appearances, and his business interests.

Trump's Twitter account turned tragic, probably after about a year, when he began fancying a run for president and also decided that the way to establish himself was to criticize President Barack Obama.  Soon, many of tweets began to make it obvious to the people who acted as if they never noticed what an incorrigible bigot, racist, sexist, and xenophobe Trump was and still is.  His pettiness and petulance is frankly stunning.  Imagine reading those tweets with cartoons that brutally accurately illustrate what a really bigly sad person Donald Trump is.

Back in 2008, Top Shelf Productions published Veeps: Profiles in Insignificance by Bill Kelter and Wayne Shellabarger.  It was an illustrated history, survey, and list of the first 46 Vice-Presidents of the United States, from the first, John Adams, to the forty-sixth, Dick Cheney.  Over the past few decades many people have proclaimed many titles from comic book publishers as worthy of being placed in secondary and college education classrooms.

Many of those comic books and books are subject to debate as to whether they should be in classrooms; some clearly should not be in classrooms.  Veeps should be on high school history and social studies reading lists.  I think Sh*t My President Says: The Illustrated Tweets of Donald J. Trump is another Top Shelf book that belongs in classrooms and also in waiting rooms, public libraries, and in the offices of the leaders of every country of Earth.

Sh*t My President Says takes its title from Justin Halpern's “Shit My Dad Says” Twitter account which spawned a book and a short-lived CBS television series.  Although I have heard of Halpern's social media feed and even watched the first episode of the TV series, I have never read any of Halpern's tweets.  Quite frankly, I don't particularly care about the statements or opinions of white men who are of middle age and older.  The exceptions are some white men and older who are artists, writers, journalists, publishers, comic book creators, filmmakers, recording artists, performers, public figures, thinkers, and scientists – you know, creative types.  I don't care for the opinions of old white men who were once professional athletes even if I liked them in their athletic prime because, for the most part, many of them resent young African-American athletes (Terry Bradshaw, Mike Ditka, Boomer Esiason, to name a few).  So I don't give a shit about the shit Halpern's dad says.

I also ignore Donald Trump's Twitter account.  However, I am interested in what Shannon Wheeler has to say, especially via his pen.  Calling this a book of illustrated tweets is not quite accurate because it makes it sounds as if Wheeler has merely drawn cartoons to go with the tweets.  He does so much more than that, to the point that these cartoons sometime defies description.

Some of Wheeler's cartoons mock the tweets they accompany, such as the August 6, 2012 tweet about Barack Obama's birth certificate.  Sometimes, these cartoons illustrate Trump's authoritarian leanings in a way that is not funny, but poignant (July 18, 2013, which is essentially Trump's complaint about regular people criticizing famous people).  Many of the cartoons are prescient because I think many of us are just now understanding that Trump is not self-aware.  For instance, I don't think he understands how callous he often comes across to people.  There is a tweet from September 11, 2013 related to 9/11, and Wheeler's simple, but evocative cartoon is like a warning, sent from the day he drew it to every day of the future.  It is as if Wheeler is saying that we should beware this man's vanity and ego, and man who does not recognize sanctity and sacredness outside himself.

Make no mistake, however; much of this book is funny.  Yes, this sh*t will tickle your funny bone as much as it tackles ye olde thinking side.  Every single person who buys books about politics and all those who read political cartoons must have a copy of Sh*t My President Says: The Illustrated Tweets of Donald J. Trump.  Honestly, in a better world, this book would sell millions.


Posted by Leroy Douresseaux at 5:20 PM