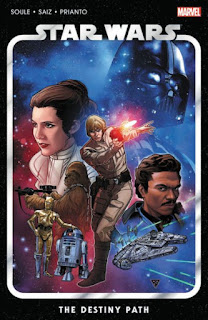 [This review was originally posted on Patreon, and visit the "Star Wars Central" review page here.]

In late 2019, the new Star Wars ongoing series began.  It is written by Charles Soule; drawn by Jesus Saiz; colored by Arif Prianto; and lettered by Clayton Cowles.  Star Wars (cover dated: 2020) starts during the last act of the 1980 Star Wars film, The Empire Strikes Back (also known as Star Wars: Episode V: The Empire Strikes Back) and then, goes on to tell the story of the aftermath of the events depicted in Episode V.

Star Wars Vol. 1: The Destiny Path opens inside the Millennium Falcon.  Its passengers:  Luke Skywalker, Princess Leia, Chewbacca, R2-D2, C-3PO, and Lando Calrissian have fled the Cloud City of Bespin, formerly owned by Lando.  They also escaped capture by the forces of the Galactic Empire, thanks to a save by R2-D2 (as seen in The Empire Strikes Back).  However, there are also feelings of recrimination and anger over Han Solo being the prisoner of a group of bounty hunters, led by Boba Fett, in service of Darth Vader – with the involuntary assistance of Lando.

Leia's plan is for the Falcon to reach The Mid Rim, Rendezvous Point: Delta-Three and join the “Fourth Division” of the Rebel Fleet.  But the Fourth Division is trapped there by Imperial forces led by Lieutenant Gorr of the Imperial Star Destroyer, “Tarkin's Will.”  Now, Leia, Luke, Chewbacca, and Lando will have to put aside the anger, pain, and grief if they are going to save the Rebel Alliance.

Meanwhile, Luke struggles with his destiny as a Jedi Knight in the aftermath of his battle with Darth Vader at Cloud City.  He calls to his late mentor, Ben “Obi-Wan” Kenobi, but does not receive a reply, and Luke also feels out of sorts with the Force – as if it has abandoned him.  Then, Luke begins to have dreams and visions of a mystery woman who holds out a lightsaber to him – perhaps to replace the one he lost at Cloud City.  Now, Luke must find her, if he is to find his way with the Force … or so he thinks.  Plus, Leia, Luke, and Lando return to Cloud City, each for his or her own reasons.

THE LOWDOWN:  Star Wars Vol. 1: The Destiny Path takes place inside the final 10 minutes of The Empire Strikes Back.  It expands on what happens between the Millennium Falcon escaping the Imperial forces shortly after leaving Bespin and the film's final moments.  Then, The Destiny Path creates a larger story of what happens afterwards, which involves several sub-plots.

The Rebel Alliance must find a new base, but first, they have to escape Imperial forces, which have found a way to track the whereabouts of the separated “Divisions” of the Rebel Fleet.  The Imperials can track one Division in order to find a second; then, it destroys both.  The main goal of Leia, Luke, Lando, and Chewbacca is to find Han Solo, and if Boba Fett hasn't already turned Han over to Jabba the Hutt on Tatooine, then, they must track Boba.

Writer Charles Soule has previously said that he hopes to use this new Star Wars series to expand on what happened between The Empire Strikes Back and Return of the Jedi (1983), the final film of the original Star Wars trilogy.  And I'm all for that!  Star Wars Vol. 1: The Destiny Path is a very well written first arc.  Soule expounds on the conflict between Leia and Chewbacca against Lando.  Soule gives Lando a chance to settle his affairs at Cloud City and to reunite with a friend (and one of my favorite characters, Lobot).

Soule delves into Luke's struggles after his duel with Darth Vader, revealing a young man adrift and who may have to find his own way.  Soule plays up the idea that Luke's journey will be different from that of any other Jedi's.  The Destiny Path allows readers to see Luke take the first big steps that he takes alone on his path to being a Jedi.

I really like the art by illustrator Jesus Saiz and colorist Arif Prianto.  The graphical storytelling is moody and emotionally, but also offers edge-of-your-seat thrills, all of it well paced by Clayton Cowles' lettering.  For however long Saiz and Prianto work on this new Star Wars series, they seem capable of capturing the dark mood of a time when the Star Wars narrative fell into the deep, cold shadows of the Empire.

I have to be honest.  Although I was a regular reader of the previous series, Star Wars (2015), my excitement for the series's last 12 issues was about a third of what it was for the first 12 issues.  Star Wars Vol. 1: The Destiny Path is making me feel excited about Star Wars comic books the way the beginning of Star Wars 2015 did.  And I feel quite safe in recommending this collection to you, dear readers and Star Wars fans.

I READS YOU RECOMMENDS:  Fans of Star Wars comic books and of the time between Star Wars: Episodes V and VI will definitely want to sample Star Wars Vol. 1: The Destiny Path.

Posted by Leroy Douresseaux at 4:03 PM