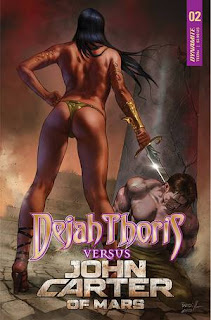 Based on the characters and stories created by Edgar Rice Burroughs

Dejah Thoris and John Carter are characters that first appeared in the serialized novel, Under the Moons of Mars (The All-Story, 1912), written by Tarzan creator, Edgar Rice Burroughs.  When it was first collected and published in hardcover, the novel was re-titled, A Princess of Mars (1917), the first of Burroughs' “Barsoom” novels, which were set on Barsoom, a fictional version of Mars.

Dejah was the title character of A Princess of Mars, the princess of the Martian city-state/empire of Helium.  John Carter was a Confederate veteran of the American Civil War who was transported to Mars via “astral projection” where he got a new body that was similar to the one he left behind on Earth.  John made several trips back and forth between Earth and Barsoom, and Dejah and John were married and had two children.

John Carter first appeared in comic books in the early 1950s, and Dejah has become a prominent comic book character since 2010 via Dynamite Entertainment.  Now, the star-crossed lovers are the stars of Dynamite's new comic book, Dejah Thoris Versus John Carter.  The series is written by Dan Abnett; drawn by Alessandro Miracolo; colored by Dearbhla Kelly; and lettered by Simon Bowland.  The series finds Dejah and John caught in a war to save Mars from an ancient race, “The Longborn,” that has returned to reclaim Mars.

As Dejah Thoris Versus John Carter #2 opens, Dejah Thoris, Queen of Helium, and her forces, the “Helium Warhost,” have traveled far into the distant west to Dar Shadeth.  There, she hoped to confront the rogue scientist, Rotak Gall, who had allied against her with her now-dead rival, the tyrant Kurz Kurtos.  Rotak claims he wants to explain his actions and to make amends.

Dejah takes a calculated risk and trusts him, believing that Rotak could aid in defending against the dreaded Longborn.  She did not expect “the Black Pirates” and Rotak's scheming.  And where is her former hero, John Carter?

THE LOWDOWN:  Dynamite Entertainment's marketing department recently began providing me with PDF review copies of some of their titles.  One of them is Dejah Thoris Versus John Carter #2, the second issue of the series that I have read.

I found the first issue of Dejah Thoris Versus John Carter #1 to be likable, and I like this second issue even more.  The art by Alessandro Miracolo still reminds me of the kind of art that readers would find in a Flash Gordon comic book.  Miracolo's art and Dearbhla Kelly colors create the idea that the story takes place on a different planet simply by making the atmosphere and lighting look like they are part of an alien biosphere.

Writer Dan Abnett, a veteran comic book scribe, kicks the story into the next gear simply by placing Dejah in Rotak's clutches.  Now, everything is on the line for the main characters, and Abnett amps up the anticipation for the next issue by using John Carter as a wild card.  This second issue is more action oriented than the first issue.  I have to say that I am enjoying Dejah Thoris Versus John Carter more than I thought I would, so I am recommending to fans of the franchise.

I READS YOU RECOMMENDS:  Fans of Dynamite's Dejah Thoris and Barsoom comic books will want to try Dejah Thoris Versus John Carter.

Posted by Leroy Douresseaux at 3:42 AM