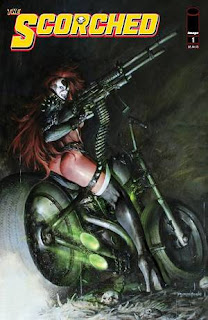 Spawn was Albert Francis “Al” Simmons.  A career military man who becomes a highly capable assassin and dies a violent death.  He makes a deal with the devil, Malebolgia, in order to return to the living realm to see his wife one last time.  However, Al returns with almost no memories accept that his name is Al Simmons, and he learns that he is now a “Hellspawn” in service of Malebolgia.  Rebelling, Al Simmons, now “Spawn,” finds a new purpose in stopping evil.

Back in February 2021, Todd McFarlane announced his plans to build a larger, multi-character, interconnected, comic book universe based around his Spawn comic book – a “Spawn Universe.”  McFarlane also announced four new comic book titles coming out in 2021, with three of them continuing as regular monthly titles.  The last of the three monthly titles, The Scorched, has arrived.

The Scorched is written by Sean Lewis; drawn by Stephen Segovia and Paulo Siqueira; colored by Ulises Arreola and Nikos Koutsis; and lettered by Andworld Design.  The Scorched features the debut of the “Spawn Universe's” first superhero team.

The Scorched #1 opens somewhere in Russia.  Medieval Spawn, Gunslinger Spawn, Jessica Priest/She-Spawn, and Redeemer are trying to save two young women, Odessa Turgnev and Natasha Gorky, from the clutches of Russian Colonel Kruschev.

Before this, however, see how Spawn brought them together.  Or did he?  Who made whom?  Plus, Gunslinger Spawn takes on the “Locust Rangers” in Crowheart, Wyoming.  And Al and Terry argue and debate, again.

THE LOWDOWN:  I read Spawn #1 back in 1992, and I had mixed feelings about it.  Yet I was a fan and followed the series for another five or six years.  I've always expected more of it...

2021 saw the expansion of the Spawn publishing line and the full birth of the “Spawn Universe.”  Writer Sean Lewis is emerging in this new era as the most consequential writer of Spawn comic books since the creator-master himself, Todd McFarlane.  McFarlane's storytelling is full of craziness, in the tradition of classic comic book weirdness and in the vein of the madness that was and is Robert E. Howard.  Lewis embraces that craziness and, using his own inventive turns, delivers high-octane fight comics, dark fantasy violence, and edgy, angry character drama.  It wouldn't be Spawn without some monsters and some edgy people.

The art team of Stephen Segovia and Ulises Arreola and the team of Paulo Siqueira and Nikos Koutsis each deliver in a solid way, and the latter's textured illustrations and painterly colors stand out.  Andworld Design's matter-of-fact lettering delivers the real foot up the ass to your imagination.  The Scorched #1 is an excellent start and is the kind of first issue that will bring readers back for more of … whatever craziness is to come.

I READS YOU RECOMMENDS:  Fans of Spawn will want to read The Scorched.

[This comic book includes four back-up stories and “Spawning Ground” Presents “The Breakdown,” in which Todd McFarlane looks back at the beginning and at the year's covers.]

Posted by Leroy Douresseaux at 3:20 AM