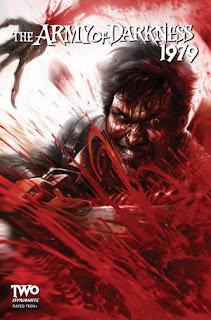 Army of Darkness is a 1992 comic horror film and the third film in the Evil Dead film franchise.  The film focuses on the series' lead character, Ash Williams (portrayed by actor Bruce Campbell), as he is trapped in the Middle Ages and battling an army of undead warriors.

In 1992, Dark Horse Comics released a three-issue adaptation of Army of Darkness, and in 2004, Dynamite Entertainment acquired the rights to produce comics based on the Army of Darkness film, featuring Ash as the main character.

The most recent Army of Darkness comic book in the Dynamite catalog is The Army of Darkness 1979.  It is written by Rodney Barnes; drawn by Tom Garcia; colored by Dinei Ribero; and lettered by Troy Peteri.  In the new series, Ash Williams finds himself in late 1970s New York City.  Not only is he fighting his usual adversaries, the Deadites and the Necronomicon, but he is also caught in a turf war between rival street gangs.

The Army of Darkness 1979 Volume 1 #2 opens in Central Park.  Now, in possession of the Necronomicon, The Warlocks and their gang leader are feeling powerful and start the killing.  Meanwhile, over in the South Bronx, Ash has taken up with a local gang, “The Half Deads.”  The plan is for Ash to help them take on the Warlocks and for them to help him recover the Necronomicon.  However, some of the other gangs are suspicious of both The Warlocks and The Half Deads, and the latter will feel that envy and wrath first.

THE LOWDOWN:  Dynamite Entertainment's marketing department recently began providing me with PDF review copies of some of their titles.  One of them is The Army of Darkness 1979 Volume 1 #2, which is the second Army of Darkness comic book I have read since I read the Dark Horse series decades ago.

The Army of Darkness 1979 Volume 1 #1 intrigued me, but it is in this second issue that the story starts to really come together.  Writer Rodney Barnes has brought in a hook or perhaps, thrown a wrench into the storytelling, and it is that everyone is suspicious of everyone's motivations.  The cliffhanger at the end of issue #2 makes me think that series writer Rodney Barnes has more crazy surprises in store.

Posted by Leroy Douresseaux at 3:02 AM