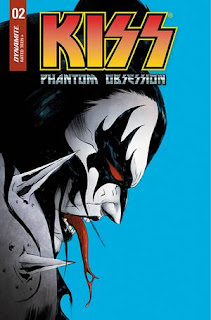 Kiss is an American, four-man, rock band.  It was formed in New York City in January 1973 by Paul Stanley, Gene Simmons, Ace Frehley, and Peter Criss, the original line-up that is also considered classic Kiss.  Kiss is best known for its members' face paint and stage outfits, and the group rose to prominence and gained a notorious reputation in the mid to late 1970s with its shocking live performances, which featured fire breathing, blood-spitting, and pyrotechnics.

The members of Kiss have licensed their band name and likenesses for merchandising.  In a 2014 article, The Hollywood Reporter reported that Kiss had sold over one billion dollars from the sale of more than three thousand licensed items.  That merchandising includes comic books.  Kiss first officially appeared in a comic book in Marvel Comics' Howard the Duck #12 (cover dated: May 1977) and first starred in their own comic book with Marvel Comics Super Special #1 (1977).  Image Comics, Dark Horse Comics, Platinum Studios, Archie Comics, and IDW Publishing have published licensed Kiss comic books.

As Kiss: Phantom Obsession #2 opens, Paul, Gene, Ace, and Peter are prisoners of Cho.  He reveals what he wants from them, or rather, what he wants to extract from them.  It seems our heroes are the totems and talisman's of legends, and their bodies hold “God particles.”

With the help of one of Cho's few human employees, Lyra Tzen, the Masters of Rock 'n' Roll manage to momentarily slip away from this reclusive maniac.  However, even Lyra has no idea where they are, as Cho has kept the location of his compound/complex secret.  And, as luck would have it, KISS and Lyra are about to meet the “Super Sonic Monster Adventure Squad!”

THE LOWDOWN:  Dynamite Entertainment's marketing department recently began providing me with PDF review copies of some of their titles.  One of them is Kiss: Phantom Obsession #2, which is only the second Kiss comic book that I have ever read.

In the first issue, I liked that Ian Edginton made the members of KISS wary of their faux-benefactor, Darius Cho.  In the second issue, Edginton reveals Cho as even more dangerous and more powerful that he seems at first.  I don't know what Cho's fate will be; for now, he gives Phantom Obsession an excellent villain, but I think he would make a great long-running adversary for KISS.

The art team of illustrator Celor and colorist Valentina Pinto:  I can take them or leave them, which is what I said of them in the first issue.  Although the art isn't the prettiest readers will find, the storytelling is good, and that's most important.  I looked forward to the second issue after reading the first; now, I find myself wanting to read the third issue... now.

I READS YOU RECOMMENDS:  Fans of Kiss comic books will want to read Kiss: Phantom Obsession.

Posted by Leroy Douresseaux at 3:01 AM