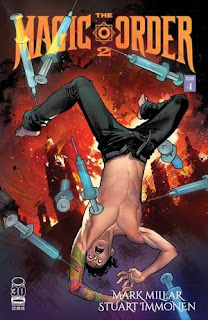 The Magic Order created by Mark Millar at Netflix

The Magic Order was a six-issue comic book miniseries written by Mark Millar and drawn by Olivier Coipel.  Published in 2018-19, The Magic Order focused on the sorcerers, magicians, and wizards that protect humanity from darkness and from monsters of impossible sizes.

A second six-issue miniseries, The Magic Order 2, has arrived.  It is written by Mark Millar; drawn by Stuart Immonen; colored by Sunny Gho and David Curiel; and lettered by Clem Robins.  The new series focuses on a magical turf war between The Magic Order and a group of Eastern European warlocks whose ancestors the Order once banished.

The Magic Order 2 #4 opens in Glascow.  The allies of the warlock Victor Korne have retrieved another piece of the Stone of Thoth, a talisman from ancient Egypt that summons anything from space, time, and beyond.  Standing in their way is The Magic Order … oops.

Standing in the way of The Magic Order is troubled wizard and drug addict, Francis King, who has just killed a fellow member of the Order.  What will the Order do?  What will Moonstone cousin, Kevin Mitchell, do to Francis?  Meanwhile, Korne's forces begin to take their revenge on humanity for spending five hundred years bowing to puny humans.

I'm getting tired of praising Mark Millar; he's just too good.  I can't do words like him, so it is getting hard to praise.  But it ain't getting hard to keep on loving his comics.  Holla!  If only he'd stop writing something great like The Magic Order 2 and write something mediocre like whatever crossover events Marvel and DC Comics are churning out.  Harry Potter and Doctor Strange wish they could be as good as The Magic Order 2.

And to Hell with Stuart Immonen and his super-talented ass.  He's been rocking my world since Shock Rockers.  Here, his storytelling bleeds electricity and casts a glamour on his readers – especially me.  With the potent colors of Sunny Gho and David Curiel, Immonen delivers something that is simply great and a blast to read.

God, it's only issue four.  I don't know if I can make it two more issues.  Dear readers, come on experience the joy of The Magic Order 2.

Posted by Leroy Douresseaux at 3:37 AM