I Reads You Review: AMAZING X-MEN #1 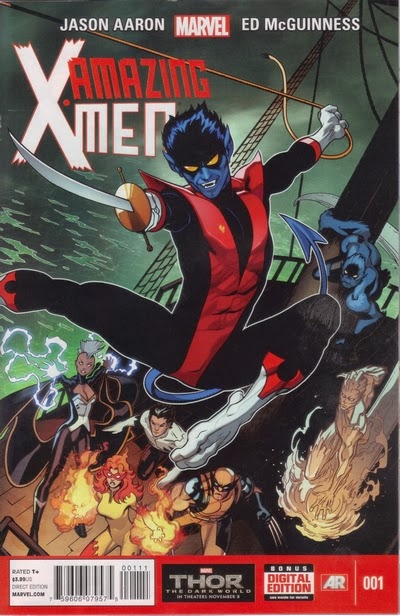 “The Quest for Nightcrawler” Part 1 of 5

There is a new X-Men comic book series.  It is entitled Amazing X-Men, and the creative team is writer Jason Aaron and artist Ed McGuinness.  There are two things about Amazing X-Men that are noticeable.  The first is that classic “New X-Men” character Nightcrawler is the focus of the book, at least for the first story arc.  The second is that this title has a humorous bent.

Nightcrawler was created by writer Len Wein and artist Dave Cockrum, although the character first existed in Cockrum’s sketchbook before the artist “gave” the character to Marvel Comics.  Nightcrawler debuted in Giant-Size X-Men #1 (cover date May 1975), the comic book which reintroduced and re-launched the X-Men comic book series.  I did not know it, but Nightcrawler was killed off during the “X-Men: Second Coming,” event storyline in Uncanny X-Force #26 (cover date April 2010).

Amazing X-Men #1 opens “somewhere beyond the realm of the flesh,” where we find Nightcrawler.  He does not seem as happy as one would expect of someone who has received the heavenly reward he believed would one day be his.  Nightcrawler may feel conflict, but his paradise is about to see some conflict.  Enter Azazel!

Meanwhile, Angelica Jones, the mutant known as Firestar, is trying to start her first day on the teaching staff of the Jean Grey School.  Everyone, and I mean everyone, is so busy.  It seems that something of a furry blue invasion of the school has commenced.

The X-Men starring in Amazing X-Men are Wolverine, Storm, Beast, Warbird, Angel, Iceman, Rachel Grey, and Firestar with Nightcrawler coming soon.  I’m inclined not to like this book.  It is silly instead of funny, and the adventure is strained and phony.  I do like that writer Jason Aaron is playing with the idea of Wolverine and Storm as friends/teammates with benefits. (whether that is “true” or not).  Aaron seems as if he has some good ideas about how to use Beast and Warbird.

Still, this book is superfluous, which is a word I can also use to describe Ed McGuinness’ squishy, marshmallow-y art.  McGuinness can draw pretty, but, here, his compositions yield bland storytelling.  Honestly, it is Marte Gracia’s colors that make this art pop off the page.

I’d like this book to be good, so I think I will try another issue...

Posted by Leroy Douresseaux at 5:59 AM