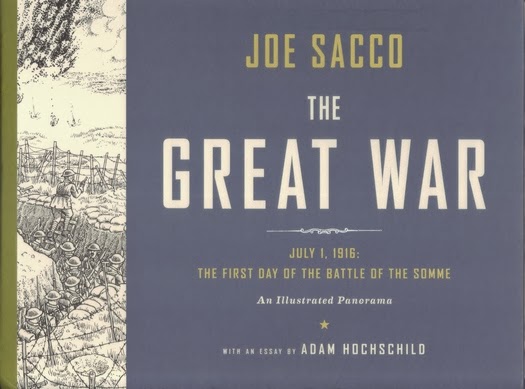 The Great War: July 1, 1916: The First Day of the Battle of the Somme: An Illustrated Panorama is a new work from Sacco.  The Great War is not a graphic novel, comic book, or even a book, as I discovered when publisher, W.W. Norton & Company sent me a copy a few months ago.

The Great War is an illustrated depiction of the first day of The Battle of the Somme.  Also known as the Somme Offensive, this was a World War I battle fought by the armies of the British and French empires against the German Empire.  The battle took place between July 1 and November 18, 1916 on either side of the River Somme in France.  More than 1,000,000 men were wounded or killed, and 20,000 British soldiers alone were killed with another 40,000 on the just the first day of the battle.

Depicted from the British perspective, The Great War is a 24-foot-long, black and white drawing.  Each foot of the drawing is a “plate,” so there are 24 plates, each plate connected to another.  This drawing is a wordless panorama presented on heavyweight, accordion-fold paper connected on both ends by a hardback cover.

The story that The Great War tells begins with General Douglas Haig, commander in chief of the British Expeditionary Force, leaving church service and moves the massive artillery positions behind the trench lines.  The drawing shows troop movements and also depicts a battle on the morning of July 1st.  It portrays the soldiers going “over the top,” as they leave their trenches to advance towards the Germans.  We see the destruction of the first hour of the attack, and a German barrage that kills many of the Brits before they can leave their trenches.  Then, we see scenes of many soldiers dying, the wounded being moved, and the gathering of the wounded to be treated, with some of them dying before they can be treated.  Finally, the panorama closes on the mass burial of British troops.

The Great War: July 1, 1916: The First Day of the Battle of the Somme: An Illustrated Panorama is packaged in a solid, cardboard, hardcover deluxe slipcase.  This set includes a 16-page booklet with some extras:  an “Author’s Note” (Sacco); a seven-page essay about the first day of the Battle of Somme written by historian and author Adam Hochschild; and Joe Sacco’s annotations for each plate of the panorama.  The dimensions of this slipcase package and its contents are 11.25 inches (width) x 8.5 inches (height) x 1.1 (depth or thickness).

In his author’s notes, Sacco writes that the model for the Great War’s panorama is Manhattan Unfurled, an accordion-style foldout drawing of the city’s skyline drawn by Matteo Pericoli.  In presenting this panorama as a narrative, Sacco writes that he looked to the Bayeux Tapestry, which tells the story of the Norman invasion of England.

Joe Sacco is known for his comic books and graphic novels.  His comic books, which acted as reports and journalism from inside war zones, refugee areas, and occupied territories, were brilliant and harrowing.  Even with his caricature, cartoony, non-realistic style, Sacco could transport you to fantastic and hellish places that were not on other planets, in other dimensions, or someplace else in time.  With his comics, Sacco can depict and portray what is right here on our world with the same gritty realism and drama that a camera can capture.

The Great War: July 1, 1916: The First Day of the Battle of the Somme: An Illustrated Panorama is not a comic book.  Like a comic book, however, it is narrative art or art as a narrative.  It is a powerful piece of work that infuriates me when I think of the human lives wasted and the human potential never met because of WWI.  I look at Sacco’s depictions of these young men dying, and I cannot help but think of the children they would never father or their fellow humans they would never help.

I am hopeful, however, that another author will try to create something like Sacco’s The Great War: July 1, 1916: The First Day of the Battle of the Somme: An Illustrated Panorama.  It takes an enormous and grand story and turns it into a unique, but assessable presentation of art and storytelling, and it is another reason to admire Joe Sacco.

Posted by Leroy Douresseaux at 6:27 AM