I Reads You Review: IMAGE FIRSTS: The Walking Dead #1 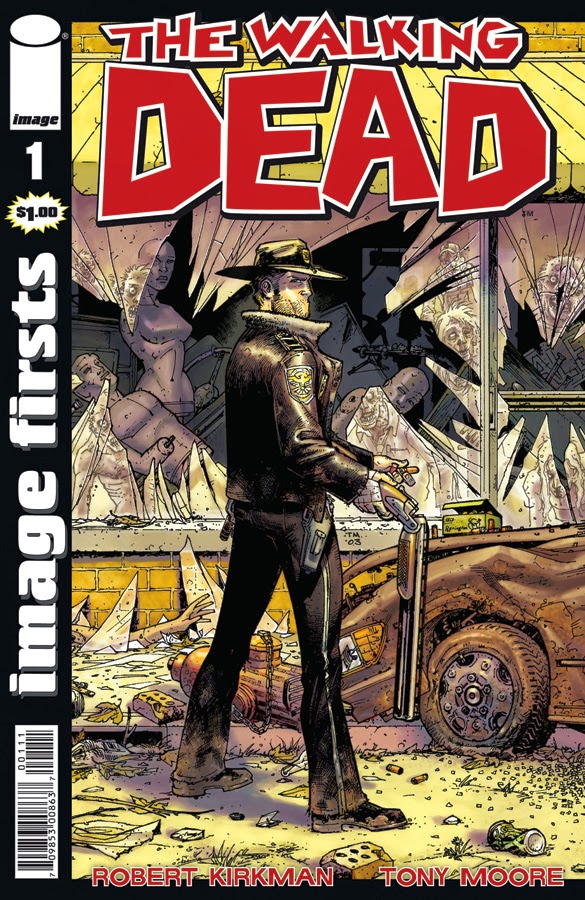 Of course, dear comic book readers, you know that The Walking Dead is an ongoing comic book series published by Image Comics.  Created by writer Robert Kirkman and artist Tony Moore, this black and white horror comic book chronicles the life and struggles of Rick Grimes and other survivors of a zombie apocalypse.

When The Walking Dead #1 (October 2003) debuted 10 years ago, I wonder if any readers or even the creators could imagine that it would become the multi-media hit it became.  That includes a comic book series that has run 116 issues (as of this writing), multiple bestselling trade paperback and hardcover collections, a worldwide hit television series (on cable net AMC), videogames, novels, etc.

I remember coming across pre-release information about The Walking Dead #1 before its debut, but I never bought it, nor did I ever read the comic book.  Image Comics has been reprinting #1 issues of the most popular titles it has published in a series called “Image Firsts.”  During a recent visit to a comic book shop, I found Image Firsts: The Walking Dead #1.  Well, here was my chance to finally read The Walking Dead.

The Walking Dead #1 introduces Rick Grimes, a police officer in Cynthiana, Kentucky.  Grimes is shot in the line of duty during a standoff.  Later, he awakens in a hospital, finding himself alone… but not really alone.  After wandering around, he meets a Black man, Morgan Jones, and his young son, Duane.  Morgan has some strange things to tell Rick.  What’s up with those things walking around?

Although by no means a bad or poor quality comic book, The Walking Dead #1 does not seem like something that would start a phenomenon, at least by my reading.  There is next to nothing in this first issue that would have made me come back for a second issue.  After reading it, I’m only vaguely intrigued.  I imagine, that back in 2003, if I had the cash or received free copies, I would have kept reading.  If things were tight, however…

I like artist Tony Moore’s clean compositions, but, once again, I’m not overwhelmed with feelings of fanboy worship.  On the other hand, I am strangely attracted to the gray tones on the art.  Every time I have ever thumbed through Walking Dead comics, my eye has been drawn to the gray tones.

Now, I’ll search out some of the weekly reprints of The Walking Dead that came out a few years ago.  At a $1 cover price, the Image Firsts are a bargain.  The interior paper is white enamel, and not cheap newsprint destined to turn ugly brown in a few weeks (Hello, DC “Showcase” and Marvel “Essentials”).  I think I’ll look for more Image Firsts.


Posted by Leroy Douresseaux at 9:19 AM