I Reads You Review: THE ROCKETEER/THE SPIRIT: Pulp Friction #2 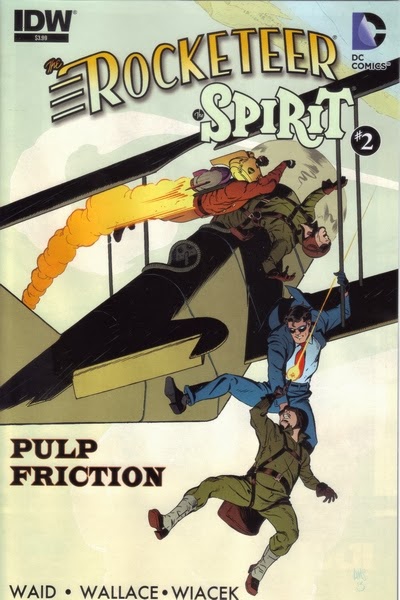 Artist and illustrator, Dave Stevens (who died in March of 2008), created the comic book character, The Rocketeer.  Cliff Secord is a stunt pilot who discovers a mysterious jet pack.  Donning the jet pack and a helmet, Secord becomes “The Rocketeer,” and begins a series of adventures set mainly in Los Angeles, beginning in the year 1938.

Legendary cartoonist Will Eisner (who died in January of 2005) created The Spirit, a comic book character that first appeared on June 2, 1940 in what readers called “The Spirit Section.”  This was a 16-page, Sunday newspaper supplement or insert that was carried in various newspapers from the 1940s and to the early 1950s.  Once known as Detective Denny Colt (believed by some to be dead), The Spirit is a masked vigilante who fights crime in Central City.

IDW Publishing (in association with DC Comics) brings the two characters together in a new comic book miniseries entitled, The Rocketeer/The Spirit: Pulp Friction.  The series is written by Mark Waid and drawn by various artists.  Pulp Friction unites the two characters, as they try to solve a murder case.  The corpse of Alderman Tommy Cunningham, Central City politician, is found in Los Angeles, which is impossible, because he should not be in L.A.

The Rocketeer/The Spirit: Pulp Friction #2 opens with the Central City contingent:  The Spirit, Commissioner Dolan, and Ellen (the Commissioner’s daughter), at odds with our L.A.-based friends: The Rocketeer, actress Betty (Cliff Secord’s lady), and airplane mechanic Peevy (Cliff’s friend and partner).  The girls are using their feminine wiles to both agitate and excite.

Meanwhile, The Spirit’s mysterious nemesis, the Octopus, plots with Benedict Trask, who seems to be trying to become the first of what we now call a media mogul.  Their plotting involves a surprise attack on our heroes.

Having Mark Waid write the first ever team up of The Rocketeer and The Spirit, as is the idea of uniting them in the first place, is a no-brainer.  Waid is good with Golden Age characters, of which both these classic comics characters are.  Here, Waid’s comics script is a nice brew of fisticuffs, high-flying derring-do, and pulp crime fiction with an occasional bit of innuendo.  Is that a rabbit in your pocket, Mr. Second?...

I thought Paul Smith was going to be the series artist, but that seems not to be the case, as this second issue and the third are drawn by different artists.  Loston Wallace, who provides the pencil art (which Bob Wiacek inks), is good enough.  His style is acceptable for this kind of story, and his storytelling is good.  The most important thing is that he does not make the transition from Paul Smith a disaster.

I’m ready for the next issue of The Rocketeer/The Spirit: Pulp Friction.  Tune in tomorrow.

Posted by Leroy Douresseaux at 7:11 AM