I Reads You Review: SCOOBY-DOO, Where Are You? #39 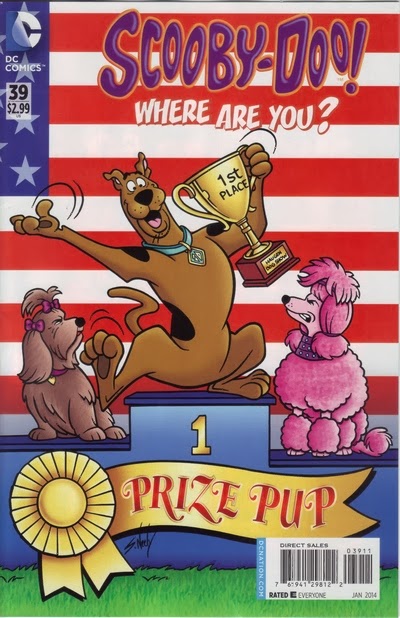 Rated “E” for Everyone

A few months ago, my sister, her husband, and their son (my nephew, of course) came for a visit.  My nephew told us that his school was doing one of those fundraising campaigns schools always seem to be doing.  Instead of candy bars or M&Ms, his school was selling magazine subscriptions, and my nephew had a catalog filled with what seemed like a few hundred magazine offerings, covering a wide range of topics.

To my surprise and delight, the subscription offerings included a few DC Comics titles.  I’m not sure why, but I chose a subscription to DC’s current incarnation of a Scooby-Doo, Where Are You? comic book series.

Scooby-Doo, Where Are You? #39 opens with the story, “Prize Pup.”  A sold-out movie means the Mystery Inc. gang ends up at the Conewango Kennel Club Dog Show just in time to solve the mystery of the “Hound of the Conewango.”  Now, Scooby-Doo might become a champion pooch or a victim!

Next, learn about such monsters of the “Plat-Eye,” the giant six-legged cow, and more in “Velma’s Monsters of the World.”  In “Ah… Rival,” the gang is off to London, England for a chance to be “Teen Detectives of the Year.”  The Sleuth Sisters Club is all that stands between our heroes and “the Golden Magnifying Glass Award,” and they mean to win by any means necessary.

The art by penciller Robert Pope and inker Scott McRae is excellent.  When it comes to drawing Scooby-Doo and Mystery Inc. in comics form, this art team deserves to be called perfect.  The coloring by Heroic Age is also quite good.

The stories are the problems in Scooby-Doo, Where Are You? #39, but not because they are bad or of poor quality.  Aside from “Velma’s Monsters of the World” (which is a gag story), “Prize Pup” and “Ah… Rival” need to be longer.  They are actually good scenarios.  In fact, they are good enough ideas that each could be adapted into a Scooby-Doo direct-to-DVD movie.

In the comic book, however, the two stories are just crammed into 10 pages or less, but they’re really made to be told as 20-page stories, at least.  They’re good stories.  They need to be – dare I say it – decompressed.

Posted by Leroy Douresseaux at 7:05 AM