I Reads You Review: TRILLIUM #2 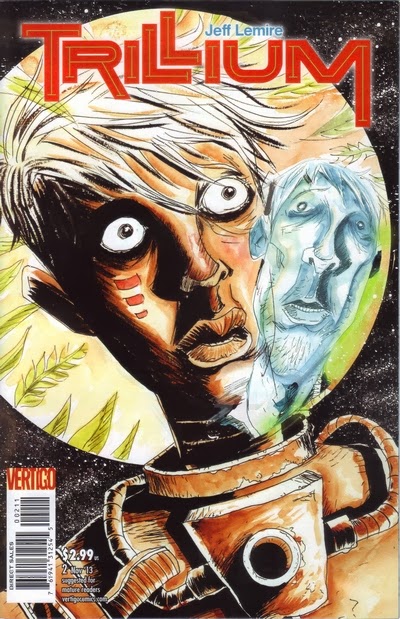 Trillium is a new science fiction comic book from DC Comics’ Vertigo imprint.  This eight-issue miniseries is created, written, and drawn by cartoonist and graphic novelist, Jeff Lemire.  Lemire described Trillium as “a time-spanning science fiction love story…” (Defy 2013 Preview – DC Comics)  The series focuses on scientist Dr. Nika Temsmith, who is an expert in xeniology (a kind of archeology), and is set in the year 3797, a time that finds humanity living in different solar systems.

Mankind is facing extinction because of a smart virus named “The Caul,” but a white-colored flower called, Trillium, can possibly save humankind.  Trillium thrives on Atabithi, and Nika is negotiated with the Atabithians, when an event tosses her back in time to the ear 1921.  There, she meets British World War I veteran and explorer, William Pike, at “the Forbidden Temple of the Incas.”

Trillium #2 (“Binary Systems”) opens with two humans from different millennia, unable to communicate with one another.  Nika thinks that she has been transported to another star system.  Pike thinks the strange woman before him is possibly part of a rival team of Norwegian explorers that is also looking for the legendary Incan temple.  What happens when they learn the truth about who, what, and when?

In my review of Trillium #1, I admitted that I am sometimes reluctant to grade or pass judgment on a first issue.  However, I was not shy about expressing my feelings and thoughts on the first issue of Trillium.  I still friggin’ love this comic book, and Trillium #2 proves that this series is really as good as I think it is, thus far.

I never thought I would enjoy a comic book that is almost entirely about two people who cannot understand each other’s language and can barely communicate, but I did, in this case.  I felt as frustrated as the characters are depicted as being, but I found that frustration to be hugely entertaining and compelling.

Jeff Lemire is giving us one of the best comic books of the year.

Posted by Leroy Douresseaux at 6:26 AM