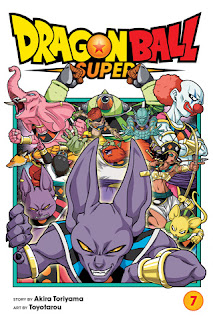 Dragon Ball was a long-running Japanese manga series written and illustrated by Akira Toriyama.  It was originally serialized in Weekly Shonen Jump from 1984 to 1995 and was comprised of 519 individual chapters.  The hero of Dragon Ball was Son Goku, and the series began with the story of his childhood.

Dragon Ball Super is a sequel to the Dragon Ball manga and to the “Dragon Ball Z” anime series.  This sequel is set several months after Goku's victory that brought peace back to Earth.  Goku and his friends must defend Earth, this time from fighters from other universes and timelines.

As Dragon Ball Super, Vol. 7 (Chapters 33 to 36; entitled “Universe Survival! The Tournament of Power Begins!!”) opens, the “Tournament of Power” begins.  It will determine the fate of universes!  Each universe that competes must field ten warriors, but they must be mortals, as gods are forbidden.  The universes that lose will face complete destruction at the hands of “the Lords of Everything.”

And it is not long into the tournament that the first universe is obliterated.  Meanwhile, some teammates plot to betray their teams … or are they?

THE LOWDOWN:  2020 is a strange year … for a number of reasons.  Of the many strange things that have filled my 2020, I have discovered that this is the year that I have read, by far, the most Dragon Ball manga that I have ever read.  This is mostly because of the Dragon Ball Super manga.

Dragon Ball Super Graphic Novel Volume 7 moves into the heart of the battle of this current story arc.  The “Tournament of Power” story is the third threat to its existence that Universe 7 has faced, and it is the most entertaining threat … at least for the readers.  Vol. 7 is pure Dragon Ball shonen battle manga.

Toriyama and Toyotarou offer so many different and inventive ways to present the fights.  I found myself on the edge of my seat because combatants were dropping like flies, often at times and in ways that I didn't expect.

Caleb Cook's translation captures the tartness of the dialogue and the conniving and betrayal.  James Gaubatz's lettering is cool and calm, expect for the sound effects with are fat on the page – suggesting the crazily loud sounds of this battle.  Vol. 7 may be Dragon Ball Super's most fun volume yet.

Posted by Leroy Douresseaux at 4:12 PM