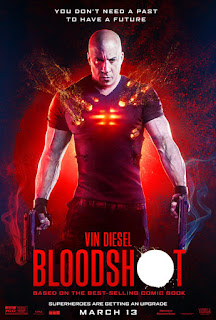 Bloodshot is a 2020 superhero and science fiction film directed by David S.F. Wilson.  The film features the Valiant Comics' character, Bloodshot, that was created by Kevin VanHook, Don Perlin, and Bob Layton.  Blooshot focuses on a slain Marine brought back to life as a super-powered weapon.

Bloodshot introduces U.S. Marine Ray Garrison (Vin Diesel).  After leading a successful rescue operation in Mombasa, Ray and his wife, Gina (Talulah Riley), travel to a beachside town on Italy's Amalfi Coast for a holiday.  However, a notorious terrorist, Martin Axe (Toby Kebbell), kidnaps Ray and Gina and demands that Ray reveal the source of the information the Marines used for the Mombasa hostage operation.  Then, things turn ugly.

Ray awakens in a lab at the headquarters of RST (Rising Spirit Tech), a company that specializes in developing cybernetic enhancements for disabled United States' military personnel.  The company's CEO, Dr. Emil Harting (Guy Pearce), tells Ray that he is the first successful candidate that they have resurrected using a special “nanite technology.”  As he embarks on his first kill-mission, Ray does not realize that very little of what he believes is true.

While watching Bloodshot, I realized that Vin Diesel has starred in a lot of science fiction and fantasy films.  They are an odd lot of high concepts and box office misfires – for the most part.  Bloodshot is one of those films that had its release truncated by the closure of most movie theaters in North America by the COVID-19 pandemic shutdown.  I am not sure if Bloodshot would have been much of a box office hit if it had had a full release...

...But it is a surprisingly enjoyable movie.  The truth is that this is something I would enjoy watching on DVD (which is how I saw the film via DVD Netflix), but, because it is based on a comic book, there is a good chance that I would have made a trip to the movie theater to see it.  Now, that I have seen it, I want to recommend it to fans of movies based on comic books and also to Vin Diesel fans.  Bloodshot is not a “Fast & Furious” film, but its action is... fast and furious... coincidentally.

Bloodshot's revenge-fantasy-within-a-revenge-tale plot delivers a lot of good action sequences.  This narrative's themes, built around the ideas of freedom, choice, control, and reality actually resonate.  While watching this movie, I often found myself asking questions like, “How free am I really?” and “How much freedom of choice is actually of my choosing?”  Bloodshot is like a story by the late author, Philip K. Dick, in which the lead character faces the truth that the reality in which he thinks he lives... is not real... or at least, it is not in his control.

Bloodshot is not a mindless action movie, and it is certainly a stronger take on the story of a military-type discovering that his body or part of it has been stolen than the 2019 Will Smith vehicle, Gemini Man.  However, Bloodshot would be a much stronger film if Vin Diesel were a better actor.  Diesel's acting range mostly runs from smooth guy to menacing guy to enraged guy.  This film's script certainly gives him plenty of scenes when Diesel has to be angry or at least to seethe.  Whenever Diesel's Ray Garrison has to be thoughtful, the film quickly moves on.

As for the supporting characters, the film's writing also doesn't offer anything more than familiar character types.  Still, actor Lamorne Morris manages to make his character, the coding rebel-genius, Wilfred Wigans, excellent comic relief.  Both actor and character are worth seeing again.

So I can honestly say that director David S.F. Wilson delivers a film that is more (at least, a little more) than it seems on the surface.  Bloodshot does not have any of those awful dry moments that make me want to fall asleep when watching an alleged action movie (which happens a lot... the aforementioned Gemini Man).  It is pretty much a fast-moving, highly-entertaining thrill machine.  Bloodshot has an excellent last act featuring a eye-spinning epic battle in and around an elevator shaft, and remember: the writing is smart enough to take its themes and ideas seriously.  In fact, Bloodshot is good enough to warrant a sequel – even if the box office... reality might keep that from happening.