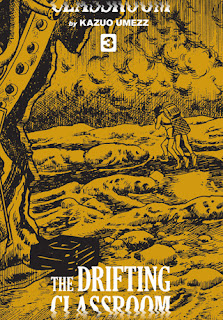 The Drifting Classroom focuses on sixth-grader Sho Takamatsu.  One morning, Sho's school, Yamato Elementary School, is apparently struck by the tremors of an earthquake.  People near Yamato discover that the school has disappeared after the earthquake; at first, they think the school was destroyed in an explosion.  However, Sho, the teachers, the students of Yamato Elementary, and a visiting pre-school child (Yuichi “Yu” Onodo) emerge from the school to discover that Yamato Elementary is now surrounded by what seems like an endless wasteland of sand.  They come to believe that in the aftermath of the massive earthquake, the school has been transported to the future.

As The Drifting Classroom: Perfect Edition, Vol. 3 (Chapters 30 to 42) opens, the surviving children are in Tokyo Station, the subway line beneath the ruins of Tokyo.  There, they learn the horrible truth about what happened to civilization and an even more horrible reality – the so-called “future humans.”

Soon, Sho and his schoolmates return to Yamato, but the group divides into two.  There are the students that follow Sho, and the students that follow the increasingly belligerent Otomo, who blames Sho for causing the event that catapulted them into the future.  The kids wage pitched battles, but will they come together to face multiple existential outside threats?

Later, the kids discover a future “Paradise” from the past, but the youngsters fall out among themselves, which leads to a series of horrible events.  Returning to the school, they learn that at least some of them may be able to return to the present day – with the help of Sho's mother, Emiko Takamatsu.  But will everything fall into place or will the children be stuck in the dark future?

THE LOWDOWN:  I have previously called The Drifting Classroom manga a mixture of horror and science fiction.  The science fiction side of the narrative follows the adventures of a group of elementary school students trapped in what resembles a post-apocalyptic world.  The horror element focuses on the students as they are engaged in constant brutal conflict that gradually, inevitably shrinks the population that was originally 862 humans.

The Drifting Classroom: Perfect Edition Volume 3 is the final volume of this “Perfect Edition” reprint series.  The chapters contained within also reveal another side of this manga.  The Drifting Classroom can also be described as a juvenile science fiction and fantasy adventure, filled with both wonders and horrors.  The truth is that after 2000+ pages of this narrative, Kazuo Umezz is as energetic as ever.  His imagination is a wellspring of wild ideas, weird creatures, and inventive twists of time and space.  Yes, many of the humans reveal themselves to be relentlessly savage and senselessly barbaric, but, at the end, Umezz brings time and space together for an unforgettable ending that offers hope – maybe even coming close to assuring it.

The translation by Sheldon Drzka and the English adaptation by Molly Danzer perfectly capture the hopefully sentiments and the gory details.  Evan Waldinger's lettering gives the dialogue and action a machine gun-like rhythm that carries the readers at a breakneck pace across the book from beginning to surprise ending.

I highly recommended the two previous volumes of The Drifting Classroom: Perfect Edition to fans of horror manga and to fans of classic manga series.  I give the third volume my highest recommendation because it is a must-read for fans of great manga.

POSSIBLE AUDIENCE:  The serious manga reader – interested in the past as well as in the present and future of the medium – will want to read the VIZ Signature release of The Drifting Classroom: Perfect Edition.

Posted by Leroy Douresseaux at 4:02 PM