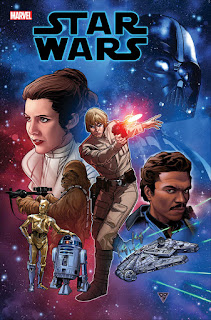 [This review was originally posted on Patreon and visit the "Star Wars Central" review page.]

“The Destiny Path” Part I

Star Wars #1 opens inside the Millennium Falcon.  Its passengers:  Luke Skywalker, Princess Leia, Chewbacca, R2-D2, C-3PO, and Lando Calrissian escaped the Cloud City of Bespin, formerly owned by Lando.  They also escaped capture by the forces of the Galactic Empire, thanks to a save by R2-D2, as seen in The Empire Strikes Back.  There are also feelings of recrimination and anger over the capture of Han Solo by bounty hunters, led by Boba Fett, in service of Darth Vader.

Leia's plan is for them to reach The Mid Rim, Rendezvous Point: Delta-Three and join the “Fourth Division” of the Rebel Fleet.  But the Fourth Division is trapped there by imperial forces led by Lieutenant Gorr of the Imperial Star Destroyer, “Tarkin's Will.”  Now, Leia, Luke, Chewbacca, and Lando will have to put aside the anger, pain, and grief if they are going to save the Rebel Alliance... and find a traitor.  Meanwhile, Luke struggles with his destiny in the aftermath of his battle with Darth Vader in Cloud City.

Star Wars #1 (2020) takes place inside the final 10 minutes of The Empire Strikes Back.  It expands on what happened between the Millennium Falcon escaping the Imperial forces shortly after leaving Bespin and the film's final moments.  Writer Charles Soule has said that he hopes to use this new Star Wars series to expand on what happened between The Empire Strikes Back and Return of the Jedi (1983), the final film of the original Star Wars trilogy.  And I'm all for that!

Star Wars #1 is a very well written first issue, as Soule expounds on the conflict between Leia and Chewbacca against Lando.  Soule delves into Luke's struggles after his duel with Darth Vader, revealing a young man adrift and who may have to find his own way.  Soule plays up the idea that Luke's journey will be different from that of any other Jedi's.  Soule also offers a tremendous mini action-thriller involving a besieged part of the Rebel Fleet, facing certain doom at the hands of Imperial Star Destroyers.  Soule creates the perfect scenario in which he can show how the post-Episode V core of heroes:  Luke, Leia, Lando, Chewbacca, and the Droids can work together to save the Rebellion.

I really like the art by Jesus Saiz and Arif Prianto.  The graphical storytelling is moody and emotionally, but also offers edge-of-your-seat thrills, all of it well paced by Clayton Cowles' lettering.  For however long Saiz and Prianto work on this new Star Wars series, they seem capable of capturing the dark mood of a time when the Star Wars narrative fell into the deep, cold shadows of the Empire.

I have to be honest.  Although I was a regular reader of the previous series, Star Wars (2015), my excitement for the series's last 12 issues was about a third of what it was for the first 12 issues.  Star Wars #1 2020 has not made me feel the original highs I felt, but it's close enough.

Posted by Leroy Douresseaux at 4:02 PM